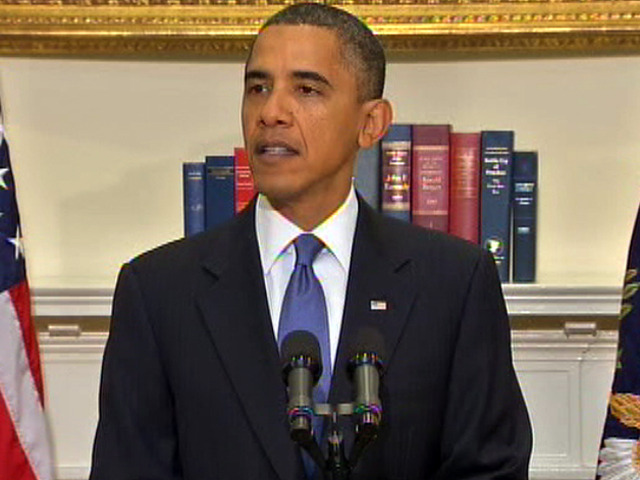 The Labor Department said that the private sector added 159,000 new jobs last month, with an overall net increase in employment of 151,000.

"We have seen four months of private sector job growth above 100,000 which is the first time we have seen this kind of increase in over four years," Mr. Obama said. "Now, that's not good enough — unemployment rate is still unacceptably high. And we've got a lot of work to do. This recession caused a great deal of hardship and it put millions of people out of work.

"So in order to repair this damage, in order to create the jobs to meet the large need, we need to accelerate our economic growth so that we're producing jobs at a faster pace.

"Because the fact is, an encouraging jobs report doesn't make a difference if you're still one of the millions of people who are looking for work," he said, "and I won't be satisfied until everybody who's looking for a job can find one.

He promised to keep fighting "for every job, for every new business, for every opportunity to get this economy moving."

Mr. Obama mentioned some of the initiatives which have already been deployed by the administration, including a small business jobs bill ("based on ideas of both parties") and the private sector.

The president also said he is open to "any idea, any proposal, any way we can get the economy growing faster so that people who need work can find it faster."

Mr. Obama mentioned some items on the agenda, including allowing small businesses to defer taxes on new equipment; tax breaks that would make it cheaper for entrepreneurs to start companies; building new infrastructure, including high-speed trains and high-speed Internet connections; promoting innovation and incentives in growth sectors such as clean energy.

It also includes "keeping tax rates low for middle class families and extending unemployment benefits to help those hardest hit by the downturn while generating more demand in the economy," he added.

He did not mention extending tax breaks for the wealthiest Americans, a key sticking point for the incoming House Republican leadership.

Mr. Obama also may continue to be met with GOP opposition to other job creation initiatives. High-speed rail projects, for example, have not found favor among many Republicans. After the election, Rep. John Mica, R-Fla., who is in line to chair the House Transportation Committee, told the Associated Press he does not agree with the projects being funded by the Transportation Department and wants to revisit the $10 billion in federal grants they have received.

Republican Scott Walker, who won the governor's race in Wisconsin, promised to stop a proposed high-speed rail link in his state. On his website, notrain.com, Walker claimed the $810 million to be spent on Milwaukee-to-Madison link would only create 55 permanent jobs ("That's $14.5 million per job!" he writes), without mentioning the 5,500 temporary jobs that would be created during the construction phase.

After the election Tuesday, outgoing Governor Jim Doyle put a hold on construction as the state government reassesses what the costs would be for shutting down the rail project permanently.