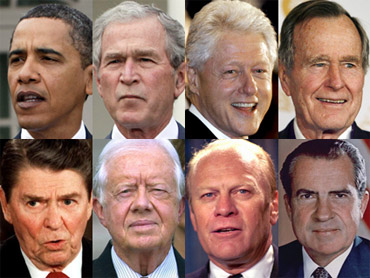 President Ronald Reagan got his shellacking in the 1982 midterm elections, with his party suffering big losses in the House. Twelve years later, President Bill Clinton got his comeuppance, as Republicans captured both House and Senate.

Yet two years after their humiliating political setbacks, both presidents came roaring back to win re-election landslides. It's a model President Barack Obama's team hopes to replicate after the Democrats' Nov. 2 thrashing.

Reagan and Clinton had one thing in common after their midterm grief that Obama clearly lacks right now: strong winds of economic recovery at their backs.

But economists and political analysts aren't ruling out a comeback for both the economy and the president in time for the next presidential election. Some see a glimmer of hope in the October unemployment report showing that, while the jobless rate held at 9.6 percent, private-sector job growth after the worst recession since the 1930s seemed to be finally picking up.

"A couple-point drop in the unemployment rate would do wonders for Obama's popularity," said Bruce Bartlett, a senior economic policy analyst in the Reagan White House and a top Treasury official in the first Bush administration.

"And keep in mind that the economy wasn't that much improved in 1936 from what it was in 1932. And FDR was able to win a pretty big victory. So nothing is preordained," Bartlett added.

There also was the pounding President Harry Truman suffered in 1946. Republicans who took over Congress vowed to undo many of the New Deal programs - sort of like health care now. Deeply unpopular, Truman railed against a "do nothing" Congress. And in 1948, he and running mate Alben Barkley - who coined the phrase "Give 'em hell, Harry" - stunned the nation with an upset victory.

Presidential historians have noted that recent presidents confronted with an economic crisis at the beginning of their terms - notably Reagan and Clinton - have gone on to win second terms. Those with the crisis near the end - Jimmy Carter and George H.W. Bush - wound up as single-termers.

Obama responded to this year's GOP sweep by suggesting he was ready to compromise on some things with GOP leaders.

Reagan, Clinton and Obama each took office at a time of economic distress.

When Reagan suffered his 1982 midterm losses, the jobless rate was 10.8 percent after a deep recession that lasted 16 months - even higher than today's jobless rate. But by Election Day in November 1984, it had declined to 7.2 percent and was continuing on a downward path.

Clinton, reeling from the failure of his own health care plan and his party's 1994 loss of Congress, found himself having to publicly declare his own "relevance" in vying with incoming House Speaker Newt Gingrich and Republicans who suddenly seemed to be running everything.

William A. Galston saw the comebacks of Reagan and Clinton up close - but from different vantage points. He was Democratic presidential candidate Walter Mondale's issues director when Reagan galloped past to win 49 states in 1984 and a top domestic policy adviser to Clinton in the mid-'90s.

Obama "needs to do his own version of what Clinton did" after his 1994 drubbing, said Galston, now a senior fellow at the Brookings Institution.

And he should clearly spell it out to the nation in his State of the Union address in January, Galston said.

Clinton brought in new advisers, "triangulated" by splitting differences with Republicans, and pushed bipartisan deals like the 1996 welfare overhaul. Also, the economy steadily improved during Clinton's presidency, and he left office in 2001 with a budget surplus.

Clinton also won over many Americans with his efforts to calm and unify a stunned nation after the 1995 Oklahoma City bombing. And Republicans led by the fiery Gingrich may have hurt themselves by pursuing a spending feud that resulted in government shutdowns in late 1995 and early 1996.

In a poll by the Pew Research Center conducted in late October, 47 of those surveyed said they would like to see Obama run again in 2012 while 42 percent said they would not. A similar poll following the 1994 midterms found that 44 percent of the public wanted to see Clinton run again and 47 percent did not. In a Gallup poll in August 1982, just 35 percent said Reagan should run for re-election, 57 percent said he should not.

"Obama's numbers are comparable, if not better, than these other presidents," said Pew Director Andy Kohut.

"Midterm elections are not good predictors for presidential elections," said presidential scholar Stephen Hess, who worked in the Eisenhower and Nixon administrations and was a transition adviser to Presidents Carter and Gerald Ford.

Hess said that through the years, most national elections have turned on two issues: "the state of the economy, meaning food on our table, and some variation of war or terrorism, the threat to us. And these things happen remarkably outside our control."