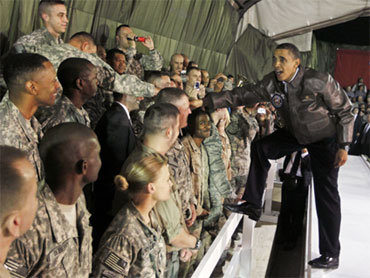 After weeks dominated by health care, President Obama's secret trip to Afghanistan turned attention back to another issue whose progress this year could help define the success of his presidency.

By deciding in December to order a massive buildup to the war he inherited, Obama placed a big bet. Nearly tripling the U.S. presence with 30,000 more troops, he escalated an unpopular war that has seen few gains in its eight years.

Those new forces are still flowing in, and the first major campaign under Obama's new strategy was launched last month, in the south. Although Afghanistan has been eclipsed recently by the contentious, cliffhanger health care debate, Obama's daunting challenge has not gone away.

Obama must show Americans that the big infusion of U.S. troops, to reach a total of about 100,000 by summer, will be worth the additional loss of life.

As Obama traveled to Afghanistan on Sunday for his first visit to the war zone as president, his aides made clear they understand the challenge and the importance of this year.

"This is really a strategic moment in the history of our involvement," national security adviser Jim Jones told reporters aboard Air Force One during the covert overnight flight to Afghanistan.

Whether he was talking to Afghan President Hamid Karzai in the presidential palace in Kabul or before 2,500 cheering American troops at Bagram Air Field about 50 miles away, the message during his six hours on the ground was the same: Afghan leaders, particularly Karzai, must step up now and make progress on old demands. Those include reducing corruption, ensuring the delivery of basic services to Afghans, providing true rule of law with an effective judicial system, turning away warlords and unqualified cronies from government positions and creating an effective national police force and army. None of these exist in Afghanistan in any large measure.

"Our intent is to make sure that the Afghans have the capacity to provide for their own security. That is core to our mission," Obama told the troops crammed into the cavernous tent known as the "clam shell."

For if Afghan leaders can't provide government that citizens can trust or security that can hold back Taliban and al Qaeda extremists, the U.S. can't leave. As Obama said, letting the region backslide to the days before the U.S.-led, 2001 invasion ousted Taliban rulers that gave safe haven to al Qaeda would put more American lives at stake.

"Make no mistake," the president declared, "this fight matters."

According to initial reports, no one died in the crash just hours after Obama's depature, NATO said. All personnel on board were evacuated to nearby medical facilities.

A police official in Zabul province where the crash occurred said 14 people were injured, including international service members, three Afghan soldiers and one Afghan policeman.

The Taliban posted a message on their Web site claiming responsibility for the crash. NATO said cause was still being investigated, but that there was no indication that insurgents shot down the aircraft.

Obama said the U.S. would not quit in Afghanistan and would be a long-term partner with its leaders and people. But, in part to pressure Karzai and in part as a nod to sentiments about the war at home, he built a deadline into his December strategy overhaul, saying U.S. troops would start withdrawing in July 2011, only a year after the new infusion is fully in place. Polls show public opinion divided on the war, though a majority approve of how Obama is handling it.

CBS News correspondent Mandy Clark reports that more than 1,000 U.S. troops have been killed in the eight year war and those casualty figures have risen sharply in recent months.

In the first three months of 2010, the number of troops killed has nearly doubled compared to the same period last year.

There have been initial military successes since Obama revamped the war.

Last month's Marjah campaign in the southern Helmand province routed most Taliban fighters from a town they once controlled, without a high casualty toll for U.S. troops and the Afghan security forces fighting alongside them. Military officials have lauded the results - cautiously. Fighting still rages across Afghanistan, any successes are still reversible and a key phase - bringing in an effective government and development so ordinary Afghans turn away from the Taliban - has barely begun.

The next big military operation for the U.S. and NATO troops is planned for Kandahar, a much larger city and the spiritual home of the Taliban. Jones said the outcome of that offensive will largely determine whether the war can be turned around this year.

Success with Karzai and his governance has been sketchier, one reason the White House insisted his Cabinet participate with Obama in most of Sunday's meetings.

Afterward Obama and his aides emphasized the positive, saying Karzai has taken enough encouraging steps just since their last talks, by secure videoconference on March 15, that the Afghan leader would be coming to Washington on May 12.

On Sunday Karzai told Obama he has begun to establish more credible national institutions on corruption and pledged to make ministerial appointments more representative of the multiple ethnic and geographic regions of the country, according to a senior administration official who spoke on condition of anonymity to describe private talks.

This month, for instance, Karzai gave more powers to the country's watchdog, the High Office of Oversight and Anti-Corruption, to go after those accused of misusing their office, including the authority to refer cases to court and act as prosecutor. The body in the past could only look at ministries but had no power to detain officials or refer cases to court for prosecution.

The trip was a remarkable capstone to a momentous week for Obama. He achieved the most ambitious domestic policy initiative in decades with the historic health care overhaul, which he signed into law Tuesday. And he scored his first major foreign policy achievement with Friday's finalization of a significant new arms control treaty with Russia.

Out of intense security fears, the trip was planned in elaborate secrecy, with staff and media sworn to keep it under wraps until Obama had safely helicoptered from his Air Force One landing at Bagram to Karzai's palace. To reduce the chance of being spotted, his entire stay occurred at night.

He ended his visit with a somber private meeting with wounded troops and then a buoyant visit to a base mess hall. Even though it was nearly 1 a.m., the bright facility was bustling with diners and the commander in chief received hearty cheers.

"I'm proud of you," Obama could be heard saying at one point, his hand clasping a soldier's shoulder. "You guys are doing great work, each and every day."