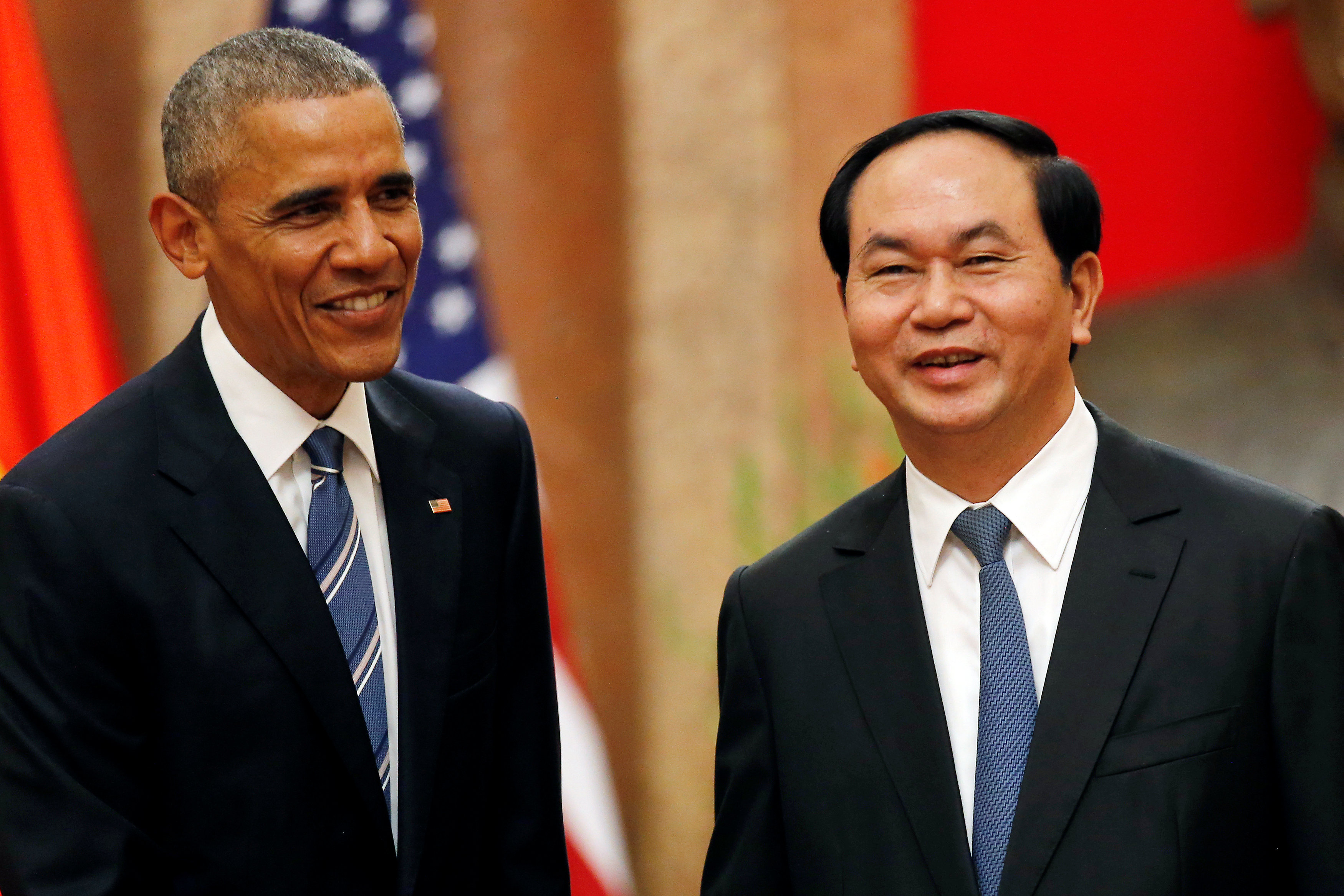 HANOI, Vietnam -- President Obama's mission in Vietnam and Japan is to build stronger economic and security ties with Asian-Pacific allies anxious about the rise of an increasingly muscular China. That forward-looking message will be delivered even as he confronts the legacies of two wars long past - Vietnam and World War II - that still are fraught with emotion.

Mr. Obama's first stop on his weeklong Asia trip is Vietnam, where he is the third sitting president to visit since the end of the war. Four decades after the fall of Saigon, and two decades after President Bill Clinton restored relations with the nation, Mr. Obama is eager to upgrade relations with an emerging power whose rapidly expanding middle class beckons as a promising market for U.S. goods and an offset to China's growing strength in the region.

Mr. Obama arrived in Hanoi late Sunday. He went to the Presidential Palace and complimented the Vietnamese on making "extraordinary progress."

Mr. Obama referred to strengthened ties between the two countries and took a photo with Vietnamese President Tran Dai Quang. Mr. Obama and Quang were to hold a joint news conference after their meeting.

During his three-day stay in Vietnam, he'll make the case for stronger commercial and security ties, including approval of the 12-nation trans-Pacific trade agreement that is stalled in Congress and facing strong opposition from the 2016 presidential candidates. Vietnam also is hoping that Mr. Obama will use the visit to erase an irksome vestige of the war by lifting the U.S. partial embargo on selling arms to the country. The idea is under consideration, but concern about Vietnam's human rights record could weigh against it.

The Reuters news agency notes that, "There has been much excitement about Obama's visit in a

country with a young population firmly behind closer U.S. ties and resentful of their economic dependence on China.

"China is Vietnam's biggest trade partner and source of imports, but trade with the United States is growing fast. It has swelled 10-fold over the past two decades to about $45 billion, and Vietnam is now Southeast Asia's biggest exporter to the United States.

In Japan, Mr. Obama will attend a summit of the Group of Seven industrialized nations, where the uncertain global economy will be a top concern of the G-7 leaders. They'll also grapple with a full array of world challenges, including the fight against the Islamic State of Iraq and Syria (ISIS) in Iraq and Syria, the refugee crisis in Europe and Russian aggression. Also on the agenda will be Beijing's assertive claims in the South China Sea that are causing tensions with other countries in the region.

While the summit isn't expected to produce any breakthroughs, it gives leaders a rare opportunity to talk through the intractable difficulties they confront.

"Remember that leaders are lonely people," says Michael Green, senior vice president for Asia at the private Center for Strategic and International Studies. "These people don't have much time to sit down with their peers to talk about common challenges."

For all of that, the culminating moment of Mr. Obama's trip will be a solemn visit to Hiroshima, where the U.S. dropped the atomic bomb that killed 140,000 people, ushering in the nuclear age seven decades ago. Another bomb killed 70,000 in Nagasaki three days later.

It will be a moment to reflect on the devastating costs of war and to try to give new impetus to the call for a nuclear-free world that Mr. Obama issued seven years ago in his first year as president.

Deputy national security adviser Ben Rhodes said the Vietnam and Japan visits both reflect Mr. Obama's world view "that we can move beyond difficult and complicated histories" to find areas of common interest.

"You could not have had a more violent conflict than we had with the Japanese in World War II, as a visit to Hiroshima will certainly mark, but now they are among our closest friends in the world," Rhodes said. "You could not have a more contested, controversial, costly, tragic war than the Vietnam War, and now (Vietnam) is becoming a partner of the United States, an important partner."

Still, concerns about human and political rights shadow the president's stay in Vietnam. The country did free a Catholic priest who had been one of its longest-serving political prisoners in the lead-up to the president's visit. But the U.S. remains concerned about severe government restrictions on citizens' political rights and limits on civil liberties and free expression.

On Sunday, the country held parliamentary elections controlled by the Communist Party, which chooses who can stand for election.

The government's heavy-handed response to recent unrest over mass fish deaths off the coast of Ha Tinh province prompted the advocacy group Human Rights Watch to call on Vietnamese leaders to put a stop to "harassment, intimidation and persecution" of environmental activists. In an unprecedented show of defiance for the communist country, thousands of people have protested publicly in at least seven cities on recent Sundays to demand a transparent government investigation. The protests were forcibly put down by security forces.

In advance of the president's visit, the White House invited representatives of Vietnam veterans' organizations to trace progress in the U.S.-Vietnamese relationship. And it brought in Vietnamese civic leaders to underscore its commitment to promoting human and political rights in the country.

Rick Weidman, executive director for policy at the Vietnam Veterans of America, who participated in one of the meetings, said there still are wounds from Vietnam that need healing. He said the U.S. needs to do more to account for those still missing from the war and to help deal with ill effects from U.S. use of Agent Orange during the war. The administration is expected to announce more steps during Mr. Obama's visit to help with cleanup of the chemical herbicide.