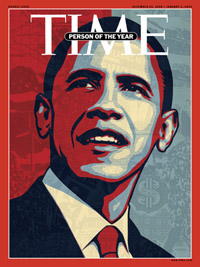 (AP Photo/ TIME)
This won't come as a shocker, but it's now official that President-elect Barack Obama was chosen by Time Magazine's editors as its "Person of the Year."

As for why, other than the obvious, the magazine writes on its Web site: "For having the confidence to sketch an ambitious future in a gloomy hour, and for showing the competence that makes Americans hopeful he might pull it off, the president-elect is Time's Person of the Year."

It's hard to think of anyone who has achieved anything more significant than being elected "leader of the free world" in 2008, but Mr. Obama did have some competition. The magazine said the runners-up were: Republican Vice Presidential Nominee Sarah Palin, Treasury Secretary Henry Paulson, French President Nicolas Sarkozy and Chinese film director Zhang Yimou (for the opening ceremonies at the Beijing Olympics).

Last year's winner was Russian President Vladimir Putin. President Bush won the honor in 2004 and 2000, after both of his election victories.

You can read more from Time here.