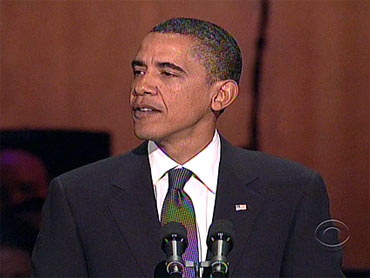 (CBS)
President Obama offered some critical words for present-day journalism at a memorial for legendary CBS Newsman Walter Cronkite Wednesday, contrasting Cronkite's personal values and dedication to getting the story right with a what he cast as a cheapened public debate.

The "standard of honesty and integrity and responsibility" that Cronkite maintained, the president said, is "a little bit harder to find today."

"We know that this is a difficult time for journalism," said Mr. Obama. "Even as appetites for news and information grow, newsrooms are closing. Despite the big stories of our era, serious journalists find themselves all too often without a beat. Just as the news cycle has shrunk, so has the bottom line."

"And too often, we fill that void with instant commentary and celebrity gossip and the softer stories that Walter disdained, rather than the hard news and investigative journalism he championed," he continued. "'What happened today?' is replaced with 'Who won today?' The public debate cheapens. The public trust falters. We fail to understand our world or one another as well as we should –- and that has real consequences in our own lives and in the life of our nation. We seem stuck with a choice between what cuts to our bottom line and what harms us as a society. Which price is higher to pay? Which cost is harder to bear?"

The president went on to quote Cronkite's comment that "this democracy cannot function without a reasonably well-informed electorate." Mr. Obama said America's future depends on the "honest, objective, meticulous reporting" that "is so vital to our democracy and our society."

"Walter was no naive idealist," the president said. "He understood the challenges and the pressures and the temptations facing journalism in this new era. He believed that a media company has an obligation to pursue a profit, but also an obligation to invest a good chunk of that profit back into news and public affairs. He was excited about all the stories that a high-tech world of journalism would be able to tell, and all the newly-emerging means with which to tell it."

"Naturally, we find ourselves wondering how he would have covered the monumental stories of our time," Mr. Obama continued. "In an era where the news that city hall is on fire can sweep around the world at the speed of the Internet, would he still have called to double-check? Would he have been able to cut through the murky noise of the blogs and the tweets and the sound bites to shine the bright light on substance? Would he still offer the perspective that we value? Would he have been able to remain a singular figure in an age of dwindling attention spans and omnipresent media?"

"And somehow, we know that the answer is yes," said the president. "The simple values Walter Cronkite set out in pursuit of -- to seek the truth, to keep us honest, to explore our world the best he could -- they are as vital today as they ever were."

"Our American story continues," he said. "It needs to be told. And if we choose to live up to Walter's example, if we realize that the kind of journalism he embodied will not simply rekindle itself as part of a natural cycle, but will come alive only if we stand up and demand it and resolve to value it once again, then I'm convinced that the choice between profit and progress is a false one -- and that the golden days of journalism still lie ahead."

View photos of Cronkite with newsmakers