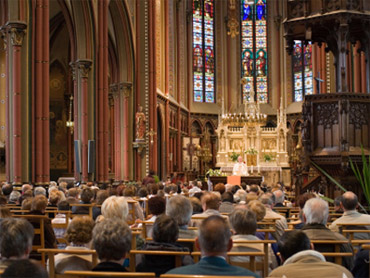 President Barack Obama signed off Wednesday on what the White House says are significant improvements to federally funded partnerships between the government and religious-based and neighborhood organizations.

A religious watchdog group disapproved of some changes and said more should be done.

The group, Americans United for the Separation of Church and State, welcomed Obama's decision to require federal agencies to provide alternatives for people who don't want to receive social services at a religious charity. It also welcomed a process to make these partnerships more open and transparent by requiring that organizations that accept federal funding be listed on government websites.

But Americans United said it was disappointed that the executive order Obama signed Wednesday will allow public money to go directly to houses of worship and permit publicly funded faith-based charities to display religious art, icons, scriptures and other symbols.

The order also does not address discrimination in hiring by faith-based charities that receive federal funds.

"At a time when jobs are scarce, it is especially troubling that qualified applicants can be rejected from government-funded positions because they don't go to the 'right' church," said the Rev. Barry W. Lynn, executive director of Americans United.

Lynn noted Obama's campaign promises to repeal the policy and said he was hopeful that Obama would keep his word.

The White House said religious hiring was not among the issues examined by an advisory council that recommended the changes Obama adopted on Wednesday. The issue is being handled through a separate process.

With the executive order "we are strengthening and clarifying the legal footing of the government's relationship with faith-based organizations and underscoring the important role of these organizations in serving individuals, families and communities in need," said Joshua DuBois, executive director of the White House Office of Faith-Based and Neighborhood Partnerships.

Among other recommendations, the advisory panel said the government should make clear that decisions about which groups receive funding must be free from political interference or the appearance of such influence. Faith-based groups also may keep religious terms in their names.