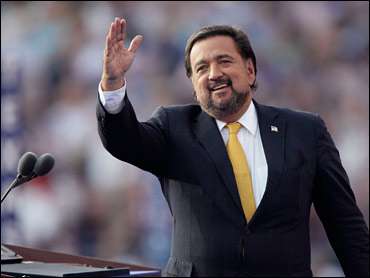 Barack Obama, soon to be the first black U.S. president, is on the road to making good his pledge to have a Cabinet and White House staff that are among most diverse ever, although some supporters are asking him to go even further.

He added to the minority representation at the top of his administration Wednesday when he named New Mexico Gov. Bill Richardson, a Hispanic, as Commerce Secretary.

But some Latinos are grumbling it is not enough after all the support they gave him in the campaign, and gays and Asian-Americans are pushing for some representation in remaining Cabinet announcements. But overall Obama is allaying some early concerns that a black president wouldn't need to put so much importance on diversity of those working under him.

"The question was: Because he's black, how much pressure would he feel to be more traditional with appointments?" said Jamal Simmons, a Democratic Party consultant who worked with the Obama campaign. "The leadership of the campaign in the beginning wasn't very diverse, so there were questions about that. But I don't hear those questions any more."

With Clinton set to replace Secretary of State Condoleezza Rice, former Secretary of State Madeleine Albright was jokingly asked at an appearance this week whether there will ever be a male secretary of state again. There probably will be "someday," she told her audience of business executives at the Fortune 500 Forum.

The United Nations ambassador is not a Cabinet position under President George W. Bush, but it was under former President Bill Clinton and Obama said it will be in his administration. His nominee, Susan Rice, is black, as is attorney general nominee Eric Holder.

Bush and Clinton also made a point of diversity in their Cabinets when they moved into the White House. Bush's first Cabinet had four women, two Asian-Americans, two blacks and one Hispanic. Clinton, who promised to appoint a Cabinet that "looks like America," had three women, two Hispanics and four blacks when he first took office.

Latino groups applauded the selection of Richardson, although some were disappointed that the Mexican-American governor was not chosen for secretary of state after Obama interviewed him for the job. A reporter from Spanish-language television network Telemundo asked Obama to respond to Hispanics' concerns that there aren't more Latinos advising him and that Richardson got the "consolation prize."

Obama responded that he's only appointed about half the Cabinet so far and when he's done, "I think people are going to say, this is one of the most diverse Cabinets and White House staffs of all time."

Obama transition head John Podesta has been meeting with Hispanic groups and hearing their suggestions for other Latinos who could be considered for high-level administration positions. Democratic officials say Rep. Xavier Becerra of California is the leading contender to be U.S. trade representative.

Latinos are the largest minority group in the country, comprising 15 percent of the U.S. population, and helped Obama win in key battleground states such as New Mexico and Florida.

"I definitely don't think we should characterize it as a consolation prize, but it's not enough," said Brent Wilkes, executive director of League of United Latin American Citizens.

Wilkes said the Richardson pick gets the Obama team on its way to mollifying some of the concerns raised "and if you trust what the transition team is saying, Latino leaders should be pleased" after all nominations are made. "And we do trust them," Wilkes said.

Floyd Mori, chair of the National Council of Asian Pacific Americans, said with blacks and Hispanics chosen for the Cabinet, "what is missing now is an Asian-American." He said given Obama's upbringing in Hawaii and his understanding of their community, they are optimistic he will appoint at least one. He suggested Illinois veterans affairs director Tammy Duckworth, former Washington Gov. Gary Locke or Rep. Mike Honda of California.

Joe Solmonese, president of the gay rights group Human Rights Campaign, sent a letter to Obama this week asking him to name labor leader Mary Beth Maxwell, a lesbian, as labor secretary. Solmonese said that he did not believe there had been an openly gay Cabinet member before, but he's confident that will change with Obama.

"Not only will we expect it, but we fully believe that it will happen," he added.

An analysis by New York University's Wagner School of Public Service and The Washington Post found that of the 28 White House staffers Obama has appointed so far, 43 percent are women and 29 percent are a racial minority. The analysis examined other areas of diversity - a third have a tie to Obama's hometown of Chicago, half worked on his campaign and two-thirds have advanced degrees.

Obama also promised to have Republicans in his Cabinet, but so far only has one in Gates. He declined to promise any more when asked if that would be it.

Todd Harris, a Republican operative, gave Obama credit for how he is handling appointments.

"He really seems to be reaching out to people that he doesn't need to reach out to politically," said Harris, who worked for Sen. John McCain's 2000 presidential campaign. "He is not filling his administration with a bunch of Illinois cronies and he really is getting people with a diverse set of views. As an American, that's a breath of fresh air."