During a surprise visit to Afghanistan President Barack Obama told American forces that U.S. lives would be at risk if the Taliban retake control of the country.

"Thanks to you, there's been progress these last several months," he told an assembled audience of about 2,500 U.S. military forces and civilians at Bagram Air Field.

"We know there are going to be some difficult days ahead. There's going to be setbacks. We face a determined enemy. We also know this: The United States of America does not quit once it starts on something. You don't quit. The American armed services does not quit. We keep at it. We persevere. And together with our partners we will prevail. I am absolutely confident of that."

"I want every American serving in Afghanistan, military and civilian, to know whether you're working the flight line here at Bagram or patrolling a village down in Helmand, whether you're standing watch at a forward operating base or training our Afghan partners or working with the Afghan government, your services are absolutely necessary, absolutely essential to America's safety and security."

The president spoke after talks earlier Sunday in Kabul with Afghan leaders.

Mr. Obama is pressing Afghan President Hamid Karzai to crack down on corruption in his country while also strengthening the judicial system and promoting good governance.

Mr. Obama met with Karzai at the presidential palace in Kabul during an unannounced visit to Afghanistan on Sunday for a firsthand look at the 8-year-old war he inherited and dramatically escalated. The White House said later than Karzai will come to Washington on May 12 for more talks.

The Afghanistan trip was intended to let Mr. Obama tell Karzai that he must crack down on corruption and cut the flow of money from poppy production and drug trafficking that is sustaining the insurgency. The U.S. also wants Karzai to halt cronyism and rewards for warlords in government hiring and to create an effective, credible judicial system.

President Obama said Afghanistan has made progress in the military campaign against insurgents and improved services to Afghans.

"This is something that simply has to be done," said Mr. Obama's national security adviser, Jim Jones. "Both presidents have to be on the same wavelength."

After an overnight flight from Washington, the president landed in Afghanistan for a stay of just a few hours, all in darkness. He flew by helicopter from Bagram Air Field to the capital, where he was greeted at the presidential palace by Afghan leader Hamid Karzai, given just an hour's notice of Mr. Obama's arrival. A military honor guard stood at attention as the president walked across red carpets. 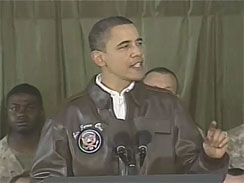 (CBS)
It was Mr. Obama's second stop in a war zone as commander in chief, coming about a year after a similarly secretive trip to Iraq.

It was his second trip to Afghanistan following a July 2008 visit when, as a presidential candidate and U.S. senator, he joined an official congressional delegation.

The White House insisted that Karzai's Cabinet participate in most of the meetings with President Obama, making the point that Karzai must work with his ministers.

This trip, its secrecy forced by security concerns, was an extraordinary capstone to a momentous week in Mr. Obama's presidency. He achieved the most ambitious domestic policy initiative in decades with a historic health care overhaul and scored first major foreign policy achievement with a significant new arms control treaty with Russia.

In December, Mr. Obama ordered 30,000 additional forces into the fight against an entrenched Taliban insurgency that seeks to retake the control of Afghanistan that the militant group lost when the U.S. invaded in 2001. Those new U.S. troops are still arriving and most are expected to be in place by summer, for a full force of roughly 100,000 U.S. troops. There were about 34,000 when Obama took office.

The trip came just two days after a threatening new audio message from al Qaeda leader Osama bin Laden, believed to be hiding along the ungoverned border between Afghanistan and Pakistan.

The White House made no advance announcement of the visit, which officials said had been long desired by the president but delayed by weather and other logistical obstacles.

Mr. Obama had gone Friday afternoon to the presidential retreat at Camp David, Md., from which unnoticed departures are easier because of its secluded mountain location. The small contingent of White House aides and media allowed on the trip were sworn to secrecy, and the White House allowed details of Mr. Obama's activities on the ground to be reported only after they were under way.

The president's plane landed under a clear sky, with only a few wispy clouds and an almost full moon. The president was greeted by the American ambassador, Karl Eikenberry. No flash photography was allowed while his arrival was kept secret.

In addition to talks with Afghan leaders, Obama planned to meet with Gen. Stanley McChrystal, the top U.S. military commander, and the U.S. ambassador to Afghanistan, Karl Eikenberry. He also was to speak with American troops.

At least 945 members of the U.S. military had died in Afghanistan, Pakistan and Uzbekistan as a result of the U.S. invasion of Afghanistan in late 2001, according to an Associated Press count. The number of U.S. troops killed in Afghanistan has roughly doubled in the first three months of 2010 compared to the same period last year as Washington has added tens of thousands of additional soldiers to reverse the Taliban's momentum.

The war is unpopular with a majority of Americans, especially progressives in the base of Obama's Democratic Party. This was reflected in Obama's new Afghanistan strategy. He combined the large buildup - his second to the Afghanistan force in less than a year as president - with a call to start bringing troops home in July 2011, just a year after the full contingent is in place.

Lately, Obama's approval ratings on his handling of Afghanistan have ticked up, to 57 percent in a March AP-GfK poll, from 49 percent in January. But the challenge ahead is daunting: justify his escalation with clear progress against the Taliban, and in building up and training Afghan army and police forces so they can begin taking over security responsibilities.

Last month, a major offensive was launched to retake the Taliban stronghold of Marjah in Helmand province.

The Marjah campaign routed most Taliban fighters from a town they once controlled, without a high casualty toll for U.S. troops and the Afghan security forces fighting alongside them. Military officials have praised the results, but cautiously.

With fighting still raging across Afghanistan, and any successes still fragile and reversible, the war is not yet considered at a turning point. The key part of Obama's new strategy for Afghanistan - turning ordinary Afghans away from the Taliban by bringing in development and installing effective government - has barely begun.

The next big military operation for the U.S. and NATO troops is being planned for Kandahar. The large city is the spiritual home of the Taliban insurgency. While it is not now under the Taliban flag, the insurgents are a constant presence.

This year has brought potentially positive news for the war.

Pakistan recently arrested Mullah Abdul Ghani Baradar - second in the Taliban only to Mullah Mohammed Omar - and other key members of the Afghan Taliban. Pakistan's government has not regularly taken on that group and has allowed it to have virtual safe haven within Pakistan. There also are doubts about whether the arrests represent Pakistan's desire to better help the U.S. or to further its own interests.

Mr. Obama's talks with Karzai come as Washington's relationship with the Afghan leader has soured. Particularly since last year's flawed presidential elections, concerns about corruption and ineffectiveness in Karzai's central government have mounted. The U.S. and Western allies have demanded, with little success, broad reforms and proof that Karzai would - and could - shake off his ties to warlords and regional powerbrokers.

One topic expected to come up was Karzai's plan for a three-day peace "jirga," or conference, in late April or early May. Looking a way to end the war, Karzai has invited Taliban participation.