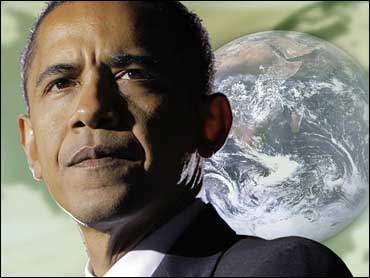 Both Holdren and Lubchenco are leading experts on climate change who have advocated forceful government response.

Holdren will become Obama's science adviser as director of the White House Office of Science and Technology Policy; Lubchenco will lead the National Oceanic and Atmospheric Administration, which oversees ocean and atmospheric studies and does much of the government's research on global warming.

Holdren also will direct the president's Council of Advisers on Science and Technology. Joining him as co-chairs will be Nobel Prize-winning scientist Harold Varmus, a former director of the National Institutes of Health, and Massachusetts Institute of Technology professor Eric Lander, a specialist in human genome research.

"From landing on the moon, to sequencing the human genome, to inventing the Internet, America has been the first to cross that new frontier because we had leaders who paved the way," Obama said in announcing his selections in his weekly radio address. "Leaders who not only invested in our scientists, but who respected the integrity of the scientific process."

"Because the truth is that promoting science isn't just about providing resources - it's about protecting free and open inquiry. It's about ensuring that facts and evidence are never twisted or obscured by politics or ideology," he said. "I could not have a better team to guide me in this work."

In their posts, the four scientists will confront challenges in global warming after years of inaction by the Bush administration, which opposed mandatory cuts of greenhouse gas pollution. Last year, former Surgeon General Richard Carmona testified to Congress that top Bush administration officials often dismissed global warming as a "liberal cause" and sought to play down public health reports out of political considerations.

Since 1993, summer Arctic sea ice has lost the equivalent of Alaska, California and Texas, and global warming is accelerating. The amount of carbon dioxide in Earth's atmosphere has already pushed past the level some scientists say is safe.

4679460Holdren, 64, is a former president of the American Association for the Advancement of Science in Washington who has pushed for more urgent action on global warming. As Obama's top science adviser, he would manage about 40 Ph.D-level experts who help shape and communicate science and technology policy.

Colleagues say the post is well-suited for Holdren, who at Harvard went from battling the spread of nuclear weapons to tackling the threat of global warming. He's an award-laden scientist comfortable in many different fields.

"Global warming is a misnomer. It implies something gradual, something uniform, something quite possibly benign, and what we're experiencing is none of those," Holdren said a year ago in a speech at Harvard. "There is already widespread harm ... occurring from climate change. This is not just a problem for our children and our grandchildren."

4679461Lubchenco, an Oregon State University professor specializing in overfishing and climate change, will be the first woman to head NOAA. A member of the Pew Oceans Commission, Lubchenco has recommended steps to overcome crippling damage to the world's oceans from overfishing and pollution and has expressed optimism for change once President George W. Bush leaves office.

"The Bush administration has not been respectful of the science," she said earlier this year. "But I think that's not true of Republicans in general. I know it's not. I am very much looking forward to a new administration that does respect scientific information and that considers it very seriously in making environmental policies."

Varmus, who was a co-recipient of the Nobel Prize for his research on the causes of cancer, served as National Institutes of Health director during the Clinton administration. A former medical professor at the University of California, San Francisco, he helped found the Ralph Lauren Center for Cancer Care and Prevention and chairs a scientific board at the Bill and Melinda Gates Foundation.

Lander, who teaches at both MIT and Harvard, founded the Whitehead Institute-MIT Center for Genome Research in 1990, which became part of the Broad Institute in 2003. A leading researcher in the Human Genome Project, he and his colleagues are using the findings to explore the molecular mechanisms behind human disease.

In his radio address, Obama said he planned early next year to more closely address the issue of engaging the nation's technology community to "harness technology and innovation to create jobs, enhance America's competitiveness and advance our national priorities."

"It's time we once again put science at the top of our agenda and worked to restore America's place as the world leader in science and technology," he said.
By Associated Press Writer Hope Yen; AP writers Seth Borenstein and Matthew Daly contributed to this report