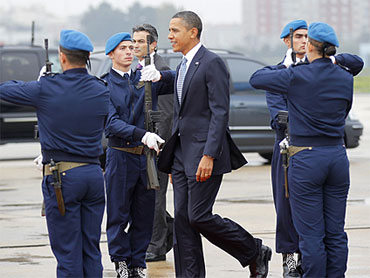 President Barack Obama announced Friday that NATO has agreed to his plans for a new, expanded missile defense system for Europe that would cover all NATO member countries and the United States.

The U.S. has a missile defense system based mainly in North America, and is planning one for its European allies.

"For the first time, we've agreed to develop a missile defense capability that is strong enough to cover all NATO European territory and populations as well as the United States," Obama said.

NATO's acceptance of the missile-shield plan was a bright spot for a president who has suffered setbacks in elections at home and in diplomacy on the world stage in the past few weeks.

On a recent swing through Asia, Obama failed to sign a free-trade deal with South Korea and couldn't muster enough support from other nations for his opposition to China's handling of its currency.

The missile shield, Obama said, "offers a role for all of our allies, it responds to the threats of our times. It shows our determination to protect our citizens from the threat of ballistic missiles."

The expanded anti-missile system is expected to cost $273 million over the next decade, according to NATO chief Anders Fogh Rasmussen, who also is seeking Russian cooperation on the project.

NATO leaders have refused to name any potential enemy, but in the past officials have publicly singled out Iran. Turkey, an alliance member with close ties to Iran, has refused to allow NATO to identify Iran as a threat.

Obama spoke between meetings on the summit's opening day and declared that "substantial progress" had been made.

The summit's focus will shift Saturday to the war effort in Afghanistan.

NATO aims to begin reducing its troop presence in Afghanistan next July, and put Afghans in charge of their country's security by 2014, a top alliance official said Friday.

Standing next to Obama to address the media after the two met privately earlier in the day, Portugal's president, Anibal Cavaco Silva, complained that the level of U.S. investment in his country is "far from what you would expect."

He said Portuguese trade and exports to the U.S. also were far from where they could be.

Obama did not respond to Cavaco Silva's comments when it was his turn to speak, choosing to focus on the goals for his latest trip abroad to attend NATO and U.S.-European Union summits.

"We've come to Lisbon again to revitalize the NATO alliance for the 21st century and to strengthen the partnership between the United States and the European Union," Obama said.

The president said the summit also provides an important opportunity for NATO and European nations to align their approach to transition in Afghanistan "as we move toward a new phase, a transition to Afghan responsibility beginning in 2011 with Afghan forces taking the lead for security across Afghanistan by 2014."

After his meeting with Portugal's president, Obama sat down with the country's prime minister, Jose Socrates. Obama told Socrates the United States would work with Portugal and Europe to address financial ills.

"Portugal is working through challenges created by some of the financial markets and I think that it's important to note that the prime minister has committed himself to a very, very vigorous package of economic steps," Obama said after their meeting, "and we are going to be working with all of Europe as well as Portugal in support of these efforts."

With high unemployment still a dominant theme at home and abroad, Obama also was careful to underscore jobs and economic benefits as the "highest priority for both our countries." He said they'd work to increase trade and investments.