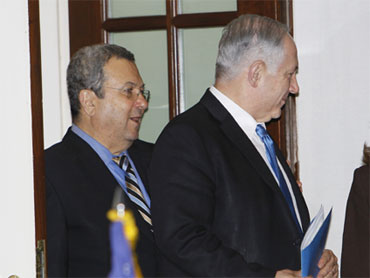 President Obama and Israeli Prime Minister Benjamin Netanyahu met at the White House on Tuesday in the midst of a serious dispute that spoiled what might have been a celebration of a recent agreement for a new round of peace talks with the Palestinians.

Obama and Netanyahu conferred for about 90 minutes in the Oval Office, but in a break with custom reporters were not invited to see the close allies shake hands and begin their discussions. The White House had no immediate comment on what was discussed. Netanyahu did not leave the White House for another two hours after his formal talks with Obama, but what he was doing during that time was not immediately clear.

At issue is Israel's announcement two weeks ago, as Vice President Joe Biden visited the country, that it will build 1,600 new apartments in east Jerusalem, the largely Arab section of the disputed holy city. Palestinians claim east Jerusalem as the capital of a future state and have delayed new U.S.-sponsored peace talks over what they say is an Israeli land grab.

"The intensity of feelings in the Arab world is mostly related to this issue," Shibley Telhami of the Saban Institute for Middle East Policy told Martin. "And, yes, that does play into the hands of militants."

Israel on Tuesday unveiled a grandiose plan for hotels, businesses and new housing for Palestinians in the center of east Jerusalem, but the announcement only brought Palestinian suspicion that it was an unacceptable payoff for new building in Jewish neighborhoods. The plan calls for developing a large area across from the Old City wall for tourism and commerce, as well as building 1,000 additional apartments.

Netanyahu received a warm public reception from Congress on Tuesday, with a top Democrat and Republican joining to praise a leader who has refused to back down in a disagreement the White House says threatens new peace talks.

The bipartisan welcome underscored the breadth of congressional support for Israel even when a U.S. president wants to keep his distance. And it pointed to the limited options, beyond verbal rebukes, that the Obama administration faces in pressuring the Jewish state.

"We in Congress stand by Israel," the leader of the House of Representatives, Speaker Nancy Pelosi, assured Netanyahu at an all-smiles appearance before the cameras. "In Congress we speak with one voice on the subject of Israel."

Secretary of State Hillary Rodham Clinton greeted Netanyahu this week with a polite rebuke. Expansionist Israeli housing policies erode trust and the U.S. position as an honest broker, she said. Netanyahu's public reply came quickly: Jews have built their homes in Jerusalem for centuries and will continue, he told a pro-Israel audience.

U.S. Mideast peace envoy George Mitchell spent Sunday and Monday shuttling between Israeli and Palestinian officials. He returned to Washington for meetings on Tuesday but appeared to have made little headway with the Palestinians. The State Department said the administration had "seen progress" from Mitchell's discussion but gave no dates for the start of a new round of talks with Mitchell as go-between.

P.J. Crowley, the State Department spokesman, told The Associated Press that the U.S. and Israel were currently engaged in "give and take."

"We are not going to talk about the precise steps both sides have to take. We will continue to discuss those steps privately," Crowley said.

There is no percentage for the Obama White House in taking on Israel too directly. Like lawmakers on Capitol Hill, Obama is mindful that American Jewish backers of Israel are traditionally reliable political supporters for Democrats.

Both nations are now trying to move on without backing down. But in Congress, lawmakers lavished praise on Israel.

"We have no stronger ally anywhere in the world than Israel," said House Republican leader John Boehner. "We all know we're in a difficult moment. I'm glad the prime minister is here so we can have an open dialogue."

Pelosi and Boehner both pointed to the threat from Iran as a top concern and an area in which the United States will cooperate with Israel. Netanyahu thanked his congressional hosts for what he called warm, bipartisan support.

"We face two great challenges," Netanyahu said, a "quest for peace with our Palestinian neighbors" and stopping Iran from developing atomic weapons.

Obama has remained out of the fray as Clinton and other U.S. officials have rebuked Israel.

Netanyahu's visit was planned before the housing dispute, and the Obama administration appears eager to let the awkwardly timed visit pass with as little public remark as possible. Both countries are eager to defuse the tensions but have refused to detail what promises Netanyahu is making to ease the most serious diplomatic breach between the two nations in decades.

In his meeting with Pelosi, Netanyahu said Israel had been building in east Jerusalem since the 1967 Mideast war, when it captured the West Bank from Jordan and would continue, according to Netanyahu's office.

The United States and other would-be international peacemakers have never recognized Israel's annexation of east Jerusalem and equate the Jewish concentrations there with Jewish settlements on the West Bank. The West Bank would make up the bulk of a future Palestinian state, and Palestinians claim that Jewish building leaves them with less space and undesirable or unworkable borders.

The Palestinian demand for a halt to building in Jerusalem as a precondition for peace talks, Netanyahu said, will serve only to delay peace talks further. Netanyahu said the sides "must not be trapped by an unreasonable and illogical demand."

Tensions between the U.S. and it main Mideast ally were palpable on Monday when Netanyahu abruptly rescheduled the venue and format of a meeting with Clinton. Instead of seeing her before photographers at the State Department, Netanyahu had Clinton come to his hotel suite for a private, one-on-one talk without aides present, U.S. officials said.

That was followed by a private dinner at Vice President Joe Biden's home that was meant to salve hurt feelings. Biden was visiting Jerusalem when Netanyahu's government announced the major building plan. Netanyahu said he was unaware of the move, blaming low-level bureaucrats, but Biden condemned the step in a written statement and Clinton followed up with an angry phone call to the prime minister.