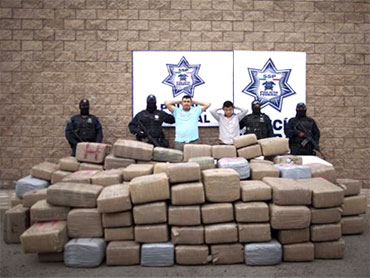 A cast of senior U.S. security officials pledged long-term support for Mexico's drug war while acknowledging Tuesday that an insatiable U.S. appetite for illegal narcotics is at the core of the problem.

Secretary of State Hillary Rodham Clinton, who led the U.S. delegation, told the meeting that the drug cartels responsible for increasing violence in the border region are fighting not just Mexican military and law enforcement forces but also the United States.

"There is no question that they are fighting against both of our governments," she said, according to a copy of her closed-door remarks. "Tragically, that fact was underscored on March 13th," with the murders of two Americans and a Mexican affiliated with the U.S. consulate in Ciudad Juarez, Clinton said.

Clinton pledged U.S. efforts with Mexico and at home to reduce demand for drugs in the United States and the flow of guns and drug proceeds to Mexico.

U.S. officials see a strategic problem with their neighbor's surging violence and unstable judicial and law enforcement systems. Mexican officials blame that instability on the insatiable U.S. demand for lucrative and illegal narcotics.

The U.S. has sent helicopters, x-ray vans and sniffer dogs to help Mexico tackle drug cartels, but Mexican leaders attending the one-day session with the visiting U.S. officials say that to really help, the Americans must tackle their problem of drug consumption.

Both President Obama and Mexican President Felipe Calderon have repeatedly stressed that theirs is a "cooperative effort" to disrupt Mexico's powerful drug cartels, whose power struggles with each other and authorities have led to the killings of 17,900 people since Calderon took office in late 2006.

Clinton was scheduled to meet separately with Calderon before returning to Washington.

The Mexican delegation was led by Foreign Secretary Patricia Espinosa.

Napolitano said the U.S. shares blame for the enormity of the drug violence problem.

"We need to keep focusing on that drug demand reduction issue," she told reporters aboard the U.S. government jet that ferried her, Clinton and other senior officials from Washington.

In the Ciudad Juarez attacks, an American who worked at the consulate and her American husband, as well as a Mexican national employee of the consulate, were gunned down in separate vehicles after leaving a children's party. U.S. officials say it appears unlikely that the victims were targeted as U.S. diplomats, but the circumstances of the shootings are still under investigation.

Napolitano said Calderon made the right decision to use military force against the drug organizations, but in the U.S. view it will take a broader effort, to include more civilian law enforcement agencies and deeper U.S. assistance, to prevail in the long run.

As a reminder of the scope of the problem of drug-related violence, Mexican authorities arranged outside Tuesday's meeting room a table full of weapons that had been smuggled through the U.S. and confiscated from drug cartels in Mexico. They included dozens of pistols and automatic rifles, including gold-plated AK-47s.

To improve cooperation and coordination between Washington and Mexico City, the Bush administration in 2008 promised $1.3 billion in aid under the Merida Initiative. But with just $128 million delivered so far, Tuesday's meeting was designed to discuss ways to refocus some of that spending in more effective ways.

"This new agenda expands our focus beyond disrupting drug trafficking organizations - which will remain a core element of our cooperation," Clinton told the group.

The administration's 2011 budget request includes about $330 million for Merida projects.

The U.S. Immigration and Customs Enforcement has 10 border enforcement teams along the southwest frontier working with U.S. and Mexican law enforcement to slow the smuggling of firearms, ammunition and explosives into Mexico. Napolitano said that effort will be reinforced as the Mexican government develops its own customs and border patrol services to perform more sophisticated checking of vehicle movements into Mexico.

Tuesday's meetings were focusing on strategies for breaking the power of the drug trafficking organizations, creating a more secure and flexible border, strengthening communities in the border region and building more effective law enforcement institutions.

The sessions in Mexico City were planned months ago.

"The tragic events in Juarez are just a reminder of the challenges that both countries face," U.S. Assistant Secretary of State Arturo Valenzuela said during a press briefing in advance of the talks.

He said that while the situation in Juarez - the murder capital of Mexico with 2,600 cartel-related killings last year - is very serious, "Juarez is not the only place where there is a serious problem. There's a problem throughout the northern part of Mexico and through the border areas."

Monday afternoon, in advance of the talks, Mr. Obama spoke with Calderon, reiterating his pledge to work with Mexico against narcotraffickers, according to at White House statement.

One item not up for discussion, said Mexico's ambassador to the United States, is the sensitive notion of using U.S. law enforcement agents in Mexico.

"There is no intention to authorize U.S. military deployment in Mexico," Ambassador Arturo Sarukhan told reporters Monday, "neither in operational tasks or in intelligence work or intelligence gathering."

Beto O'Rourke, who sits on El Paso's city council, was not optimistic that the talks could reduce the spate of grisly slayings in Juarez, one of its sister cities.

"Secretary Clinton's visit will do nothing to fundamentally change the long-term outlook for our region's peace and prosperity if she does not tackle the politically difficult issues of consumption and prohibition in the U.S.," he said.

David Shirk, director of the University of San Diego's Transborder Institute, said the U.S. needs to fund programs and projects well beyond the equipment and law enforcement training paid for under the Merida Initiative.

"The U.S. aid budget for Mexico is embarrassingly low, particularly compared to other countries in the region," said Shirk. "We have to begin moving more resources toward institution-building and comprehensive development strategies for Mexico."

"A future strategy will have to look at effective ways to track criminal organizations and their finances, reduce the demand for narcotics and build dialogue with communities that are under stress from the current violence," said Andrew Selee, director of the Woodrow Wilson Center's Mexico Institute.

Following the March 13 attacks that killed the three with ties to the Juarez consulate, U.S. authorities launched an offensive against a border gang suspected in the slayings.

On Monday, El Paso officials announced that "Operation Knock Down" had led to 25 arrests, including 10 confirmed members of the Barrio Azteca gang.