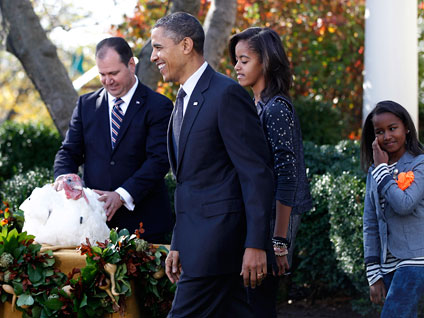 They're the latest numbers on Barack Obama's presidential pardon scoreboard.

During his first 22 months in office, he has not granted any presidential pardons, though he has publicly pardoned four turkeys including two 45-pound gobblers this morning at a Rose Garden ceremony.

He joked about the annual turkey pardons being one of his "awesome" responsibilities "as leader of the most powerful nation on Earth." And with tongue in cheek, he likened the turkey pardons to the midterm elections 2 Â½ weeks ago. "Let me say that it feels pretty good to stop at least one shellacking this November."

Pardoning poultry is arguably the goofiest thing a U.S. president does in public, though it's a fairly recent phenomenon.

The occupants of the Oval Office made a ceremony out of receiving a turkey each Thanksgiving beginning with Harry Truman in 1947. But the staff of the Truman Presidential Library can find no evidence he ever granted one a pardon. The assumption is the birds went to the White House chef for slaughter, plucking, stuffing and roasting.

The presidential pardons of Thanksgiving turkeys began in earnest with George H. W. Bush in November of 1989.

"Let me assure you, and this fine Tom Turkey, that he will not end up on anyone's dinner table - not this guy," said Mr. Bush on the occasion of his first Thanksgiving as president. "He's granted a Presidential pardon as of right now -- and allow him to live out his days on a children's farm not far from here."

And each of Mr. Bush's predecessors has repeated the gesture since then. It clearly takes less thought and consideration to pardon a turkey than people.

Mr. Obama is not the first president to have pardoned more turkeys than people nearly two full years into his term in office. President George W. Bush hadn't granted any real pardons yet at the same point in his presidency. By the end of his eight years in the White House, Mr. Bush had granted 189 pardons - the fewest of any post-war president with one exception: his dad. He had granted 74 during his one term as president.

The Office of the Pardon Attorney, which receives and processes pardon applications for the president, reports on its website that Mr. Obama has neither granted nor denied any pardon requests during his first 20.5-months in office. There were 494 petitions for pardons received during that period, bringing the total of petitions pending to 1,140. The numbers show 247 pardon petitions were closed on Mr. Obama's watch without presidential action.

It has since been reported but not posted by the Pardon Attorney that Mr. Obama formally denied 71 requests for pardons last month. Some critics, including former Pardon Attorney Margaret Colgate Love, urge Mr. Obama to grant real pardons to deserving recipients.

"It may be that your advisers have cautioned that extending clemency to humans is politically risky, and discouraged you from acting favorably on any of the hundreds of pending applications that await your consideration," writes Love in a "Dear President" op-ed in the Washington Post this month. "But this advice is at best shortsighted," advises Love, whose private practice now deals with pardon applications for clients.

"Thousands of ordinary people living productive and law-abiding lives in this country are disqualified from opportunities and benefits because of a conviction record that may be decades old. These are people who have earned the second chance that a pardon represents," writes Love.

According to the pardon attorney, here are the numbers of pardons granted by U.S. presidents since 1945:

The preceding numbers do not include turkeys or other poultry.