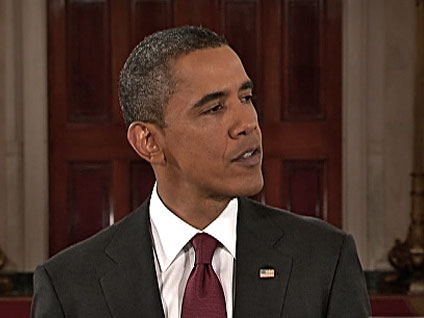 President Obama said at a press conference Wednesday that the results of yesterday's midterm elections - in which his party lost Control of the House as well as Senate seats and governorships - "underscores for me that I've got to do a better job."

"I won the election in 2008, one of the reasons, I think, that people were excited about the campaign was the prospect that we would change how business is done in Washington," he said. "And we were in such a hurry to get things done that we didn't change how things got done. And I think that frustrated people."

He also placed the blame for the outcome of the midterms on that "very tough decisions" made by his administration during his first two years in office on the stimulus package, the bank bailouts (which were first passed under President Bush) and the auto bailouts.

"I think people started looking at all this and it felt as if government was getting much more intrusive into people's lives than they were accustomed to," he said. "Now, the reason was, it was an emergency situation. But I think it's understandable that folks said to themselves, 'You know, maybe this is the agenda as opposed to a response to an emergency.'"

Continued the president: "And that's something that I think, you know, everybody in the White House understood was a danger. We thought it was necessary. But, you know, I'm sympathetic to folks who looked at it and said, 'This is looking like potential overreach.'"

He noted that the costs of the policies prompted people to say, "Gosh, we already have all this debt. We already have these big deficits. This is potentially going to compound it. And at what point are we going to get back to a situation where we're doing what families all around the country do, which is make sure that if you spend something, you know how to pay for it, as opposed to racking up the credit card for the next generation?"

The president said last night was a "long night" for him, adding that "some election nights are more fun than others."

Clad in a red tie, he also addressed the prospects for compromise with the GOP.

Obama: I'll Talk to GOP on Health Care, But...
What's Next for Obama and Congress?
"Slurpee Summit" on Horizon for Obama & Boehner?
Obama's 2010 "Shellacking" is Like Bush's 2006 "Thumping"
Obama Press Conference: Obama Cites "Danger" of the White House and the "Bubble"

"I am very eager to sit down with members of both parties and figure out how we can move forward together," he said. "I'm not suggesting this will be easy. There's a reason we have two parties in this country, and both Democrats and Republicans have certain beliefs and certain principles that each feels cannot be compromised."

He said he did believe the parties could find common ground on some issues, however, including energy policy.

"As I said before, no person, no party has a monopoly on wisdom," he said. "And that's why I'm eager to hear good ideas wherever they come from, whoever proposes them. And that's why I believe it's important to have an honest and civil debate about the choices that we face."

"We just had a tough election," he said. "We will have another in 2012. I'm not so naive as to sink -- to think that everybody will put politics aside until then. But I do hope to make progress on the very serious problems facing us right now. And that's going to require all of us, including me, to work harder at building consensus."

" I do believe there is hope for civility," he added. "I do believe there's hope for progress. And that's because I believe in the resiliency of a nation that's bounced back from much worse than what we're going through right now; a nation that's overcome war and depression, that has been made more perfect in our struggle for individual rights and individual freedoms."