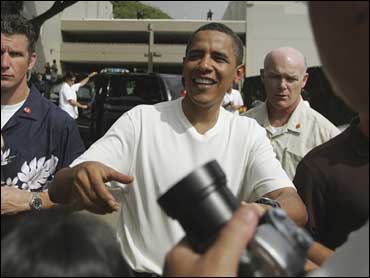 More kids than ever are crammed into aging, run-down schools that need an estimated $255 billion in repairs, renovations or construction. While the president-elect is likely to ask Congress for only a fraction of that, education experts say it still could make a big difference.

"The need is definitely out there," said Robert Canavan, chairman of the Rebuild America's Schools coalition, which includes both teachers' unions and large education groups. "A federal investment of that magnitude would really have a significant impact."

Educators argue that spiffy classrooms help children learn and also remove health risks. But they warn that Obama's school spending plan won't stimulate the economy if it requires matching funds from state and local governments whose tax revenues have been slashed by the recession.

And they caution that throwing huge sums of money at programs that haven't proven effective, such as the federal "E-Rate" program that gives technology discounts to schools, won't help student achievement or the economy.

Obama is promising to give every student access to the Internet

"It's made very little difference in enhancing student achievement," she said.

"We should never spend money in the public sector, especially in education, unless we're getting something for it, unless it's to some good end," Spellings said. "I commend him (Obama) for taking that on. That's another very ripe area. But not unless it's moving the needle for kids."

There's widespread agreement, however, that improving classrooms helps student performance. Studies in Houston, New York City and North Dakota have made a link between classroom conditions and performance; in the New York study, researchers found kids in crowded classrooms scored lower in math and reading.

Nearly half the principals in primary and secondary schools said deteriorating conditions are interfering with learning, according to the Education Department.

Judi Caddick, a middle school math teacher in blue-collar Lansing, Ill., just south of Chicago, said in the older part of her World War II-era school, classrooms had just two power outlets, forcing teachers to string multiple extension cords into the rafters or to unplug a TV power point presentation in order to plug a computer in for a child.

Special education classrooms flooded when plumbing backed up, leaving an unmistakable smell on hot days, not to mention allergy and asthma problems, despite efforts to clean the carpet, she said. And hallways were so dark and crowded, teachers often couldn't see shoving and bumping in time to stop fights.

A new building to replace that old school is now almost complete. The last group of students, the eighth graders, moved in earlier this year.

Upgrades can also make kids healthier; measures to prevent mold can decrease asthma, which is the No. 1 chronic illness making kids miss school.

Obama has given few specifics about his economic recovery plan, which could cost as much as $850 billion over two years. There is no word on how much of that would go to schools, or on how much would go toward repairs versus new construction.

The only dollar figure from Obama so far is that schools would share with roads in an immediate infusion of $25 billion for repairs and rebuilding.

It would take 10 times that amount or more to fully modernize schools, according to an analysis last month by the American Federation of Teachers. In all, schools need about $255 billion in maintenance, new construction, renovation and retrofitting for computer technology, among other things, the union said.

An earlier estimate from the National Education Association placed the cost even higher, in the range of $360 billion.

However, it might not take nearly that much money to make a dent. Federal dollars usually account for only a portion of construction and other school needs; state and local governments also kick in a share.

But with state and local tax revenues plummeting because of the recession, where would states get the money to match school upgrade dollars from the feds? Already, 19 states have lowered their tax revenue forecasts for 2009, according to the National Conference of State Legislatures.

"If there is any kind of matching requirement, it's going to be more problematic for state and local governments to match," said David Shreve, education policy analyst for NCSL. "Because everybody is hurting badly and cutting everything else."

The new Congress begins work on the economic recovery plan on Wednesday with a hearing by the Democratic Steering and Policy Committee. California Rep. George Miller, chairman of the House Education and Labor Committee, said school modernization will be part of the hearing.

Obama aides working on the stimulus package say they want projects that can start immediately, putting people back to work. A study by the Economic Policy Institute estimates that spending $20 billion on deferred maintenance in school districts across the country would create nearly 250,000 skilled maintenance jobs.