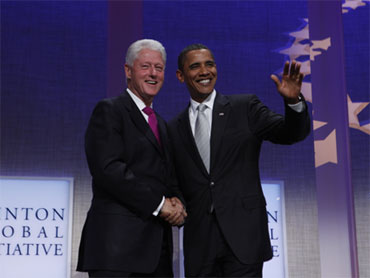 (AP/Charles Dharapak)
With the world at a moment with "great promise but also with great peril," the mission of the Clinton Global Initiative is more critical than ever, President Obama said Tuesday at the opening of the organization's annual meeting in New York City.

Founded by former President Bill Clinton in 2005, the organization focuses on addressing major global issues like building economic empowerment and citizen service, health and education, and energy and climate change.

Mr. Obama said today it was "no exaggeration" that the work of the organization could "save the lives of millions." And it proved, he said, that "you don't have to hold a public office to be a public servant."

He learned that lesson, he said, from watching his mother champion women's welfare in Indonesia as well as from working as a community organizer in Chicago.

"Whether you live in the foothills of Java or the skyscrapers of Manhattan, we all share common principles," he said.

Understanding that connection, he said, is more important than ever, with threats facing the world ranging from extremists in Afghanistan and poverty in Somalia to reckless speculation in the financial industry.

"We stand at a transformational moment in world history," he said.

Secretary of State Hillary Clinton has led in the development of a foreign policy that makes it "clear the kind of future we want to build," the president said, and engages political leaders, religious leaders, citizens and nongovernmental organizations.

More Coverage of Obama in New York this week.