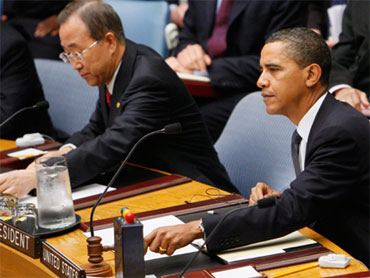 The resolution calls for stepped up efforts to prevent the spread of nuclear weapons, promote disarmament and "reduce the risk of nuclear terrorism."

At the same time, some world leaders called for more support for the use of nuclear energy in developing nations.

"Access to this affordable, safe energy source must be expanded," British Prime Minister Gordon Brown said. He added, however, that access to civil nuclear power must not mean increased access to nuclear weapons.

"We cannot stand by while Iran and North Korea... take steps to develop nuclear weapons in a way that threatens international peace and regional security," he said.

Brown and French President Nicolas Sarkozy said a tougher, more realistic approach must be made to contain the development of nuclear weapons in Iran and North Korea.

"We are saying yes, reductions, yet right in front of us two countries are doing exactly the opposite," Sarkozy said. "If we want a world without nuclear weapons let us not accept violations of international rules."

It was only the fifth time the Security Council met at summit level since the U.N. was founded in 1945. And Obama was the first American president to preside over a Security Council summit, gaveling the meeting into session and announcing that "the draft resolution has been adopted unanimously."

"The historic resolution we just adopted enshrines our shared commitment to a goal of a world without nuclear weapons," Obama said immediately after the vote. "And it brings Security Council agreement on a broad framework for action to reduce nuclear dangers as we work toward that goal."

Just one nuclear weapon set off in a major city could cause major destruction, Obama said.

He said the global effort would seek to "lock down all vulnerable nuclear materials within four years."

"This is not about singling out an individual nation," he said. "International law is not an empty promise, and treaties must be enforced."

"We will leave this meeting with renewed determination," Obama said.

"This is a historic moment, a moment offering a fresh start toward a new future," he said.

Russian President Dmitry Medvedev said that "our main shared goal is to untie the problem knots" among nations seeking nuclear nonproliferation and disarmament.

"This is complicated since the level of mistrust among nations remains too high, but it must be done," he said.

Obama aides see adoption of the resolution as an endorsement of the president's entire nuclear agenda, as laid out in his April speech in Prague. He declared his commitment to "a world without nuclear weapons."

The president called in that speech for the slashing of U.S. and Russian nuclear arsenals, adoption of the treaty banning all nuclear tests, an international fuel bank to better safeguard nuclear material, and negotiations on a new treaty that "verifiably" ends the production of fissile materials for atomic weapons.

He also strongly backed the Nuclear Nonproliferation Treaty, or NPT, which requires signatory nations not to pursue nuclear weapons in exchange for a commitment by the five nuclear powers to move toward nuclear disarmament. States without nuclear weapons are guaranteed access to peaceful nuclear technology for electricity generation.

All those measures are included in the draft resolution.

In its opening paragraph, the draft reaffirms the council's commitment "to seek a safer world for all and to create the conditions for a world without nuclear weapons."

Arms control advocates say those elements are interconnected. Some nations might eventually reject the limitations of the Nonproliferation Treaty, for example, if the U.S. and other nuclear powers don't abide by that treaty's requirement to move toward disarmament by reducing their arsenals, or if they reject the test ban.