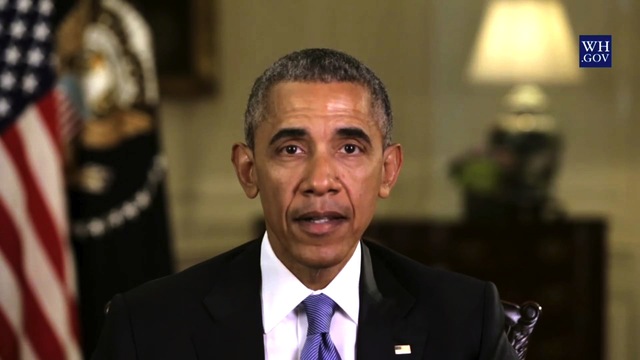 The Department of Justice (DOJ) will be taking new actions to facilitate the re-entry of former prisoners into society, President Obama announced in a video released Saturday.

The DOJ is focusing specifically on building up "strong re-entry programs" and showing how they can "make communities safer," according to the president.

"My administration will announce new actions that will build on the progress we've already made," he said. "We'll release more details about how we are taking steps to ensure that applicants with a criminal history have a fair shot to compete for a federal job."

The president also revealed that the administration would be issuing a new report on the economic costs of high incarceration rates, along with new efforts asking private companies to hire former prisoners.

Mr. Obama noted that while "plenty of people should be behind bars," many are locked in a cell "because we have criminal justice policies, including unfair sentencing laws, that need to be reformed." The prison population, he added, also disadvantaged minority communities, with the incarceration rates of blacks and Latinos outpacing whites.

For the 600,000 people released from prison yearly, "we need to ensure that they are prepared to re-enter society and become productive, contributing members of their families and communities - and maybe even role models," the president said.

Despite the new push on criminal justice reform, the president acknowledged that more steps need to be taken in the future, including addressing the pipeline from "underfunded schools to overcrowded jails" and exploring alternatives to prison, such as drug courts and mental health treatment.

The president concluded with a challenge to Congress to pass and send a bipartisan criminal justice reform bill to his desk for signing.

"This isn't just about what makes economic and practical sense," he said. "It's about making sure that we live up to our ideals as a nation."

Republicans also addressed a drug-related issue in their own video address Saturday, with West Virginia Rep. Evan Jenkins discussing the effects of the growing opioid epidemic on American children.

"Every 25 minutes in America, a baby is born who was exposed to drugs during pregnancy. Because of their exposure to opioids, heroin and other drugs, they may spend their first weeks suffering from withdrawal," Jenkins said. Neonatal abstinence syndrome, he added, "is becoming all too common," especially in his home state.

"Through this bill, we will learn more about just how many newborns are suffering from withdrawal and more about the federal obstacles to treating them," Jenkins said, noting that it's just one of several bipartisan initiatives in Congress to combat opioid abuse.

"No one deserves to start his or her life in withdrawal," he said. "It is our responsibility to care for the most vulnerable in our society."