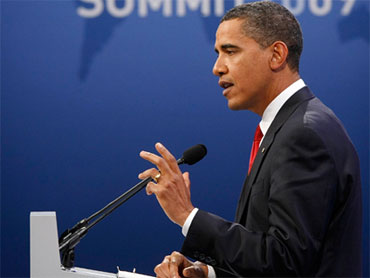 (AP)
As President Obama reaches a critical turning point with respect to the war in Afghanistan, the president said Friday he understands the wavering public support for the United States' continued presence there.

"I understand the public's weariness to this war, given that it comes on top of weariness about the war in Iraq," Mr. Obama said. "I would expect that the public would ask some very tough questions. That's exactly what I'm doing."

The president spoke from Pittsburgh at the end of the G20 summit, where he also addressed the nuclear threat from Iran.

Mr. Obama's top commander in Afghanistan, Gen. Stanley McChrystal, issued a report saying that without a buildup of troops, the United States could fail in its objectives. The administration may entirely rethink its strategy there, however.

The latest CBS News/ New York Times poll shows there is little public support for a troop increase. Furthermore, some suggest it would be ineffective.

"After several years of drift in Afghanistan… it's important that we examine our strategies to make sure that they actually can deliver on preventing al Qaeda from establishing safe havens," Mr. Obama said Friday.

The United States' goal, the president said, is to dismantle, disrupt and destroy the al Qaeda network. Stability in Afghanistan and Pakistan are critical to that mission, he added.

"We went into Afghanistan not because we were interested in entering that country or positioning ourselves regionally, but because al Qaeda killed 3,000-plus Americans," Mr. Obama said.

Success will largely depend on whether the Afghan people and their government will be able to serve themselves, Mr. Obama said. The allegations of fraud in the recent election are a concern, he said.

"What's most important is that there is a sense of legitimacy in Afghanistan among the Afghan people for their government," he said. "If there is not, that makes our task much more difficult."

The president said he will decide how to proceed in Afghanistan not only based on military strategy but also based on civilian and diplomatic considerations.

"My solemn obligation is to make sure that I get the best answers possible, particularly before I make decisions about sending additional troops into the theater," he said.