Barack Obama and his aides did not try to cut any deals with Illinois' embattled governor, accused of trying to sell the president-elect's vacant Senate seat for cash or a lucrative job, according to an internal review released Tuesday.

The report, whose release was delayed from last week at the request of U.S. Attorney Patrick Fitzgerald, supports Mr. Obama's insistence that there had been no inappropriate contact with the governor's office by Mr. Obama or his staff. Prosecutors had said Mr. Obama is not implicated in the case.

"We are satisfied there was nothing inappropriate that took place here, either in terms of conversations or communications or contacts, between transition officials and the governor's office," Craig said after releasing the report.

Mr. Obama's Chief of Staff Rahm Emanuel was the only Obama transition team member who discussed the Senate appointment with Blagojevich, and those conversations were "totally appropriate and acceptable," Craig said Tuesday. No one on Mr. Obama's transition team discussed any deals or had any knowledge of deals, Craig's report found.

Sources have said Emanuel is not a target in the case.

So far, Obama's team has refused requests from the media to release emails or notes of contacts with Blagojevich's office, reports CBS News correspondent Ben Tracy.

In Hawaii, President-elect Obama did not make any public comments. Instead, he is attending a memorial service for his grandmother who died right before Election Day, Tracy reports.

Craig's report identified close Obama friend Eric Whitaker as someone approached by one of Blagojevich's top aides to learn "who, if anyone, had the authority to speak for the president-elect" about the Senate appointment.

The report says Mr. Obama told Whitaker "no one was authorized to speak for him" and that "he had no interest in dictating the result of the selection process."

Blagojevich attorney Edward M. Genson, who has said allegations that the governor was trying to sell or trade the Senate seat are built on nothing but talk, said Mr. Obama's report proves his point.

"I've said from the beginning that there was nothing inappropriate, and this just corroborates what I've said," Genson said.

Blagojevich was charged on Dec. 9 with plotting to use his governor's authority to appoint Mr. Obama's Senate replacement and make state appointments and contracts in exchange for cash and other favors. He has denied any criminal wrongdoing and has resisted multiple calls for his resignation, including one from Mr. Obama. 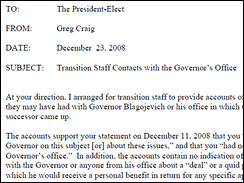 Download: The Document (pdf)
An internal review released by the transition team for Barack Obama.
Craig's report states that Emanuel had "one or two telephone calls" with Blagojevich and four conversations with John Harris, the governor's chief of staff who later resigned after being charged in the federal case. Craig told reporters Emanuel said he couldn't be sure it was only one call.

Emanuel left for a long-planned family vacation in Africa on Tuesday and was not available for comment.

The report was released in Washington while Mr. Obama was vacationing in Hawaii. The president-elect did not make himself available for questions.

The report is based on the Obama team investigating itself, and was conducted by interviewing staff and taking their answers about any contacts at their word. Gibbs said this was consistent with the charge given to Craig by the president-elect.

A transition official said Craig doesn't have the legal power to more thoroughly investigate and try to corroborate the accounts. The official spoke on condition of anonymity to more freely discuss the thinking behind the inquiry.

Meanwhile, federal prosecutors have asked the state committee studying Blagojevich's impeachment not to dig into criminal charges against the governor, warning that it could "significantly compromise" their investigation.

Members of the committee have promised to abide by any direction from prosecutors on what should be off limits, so the request from Fitzgerald means the panel won't question Blagojevich aides and campaign donors about possible crimes.

But the committee can still consider the fact that the Democratic governor has been charged with federal crimes. Members say they'll look at evidence outlined in the complaint against him - including wiretapped conversations on which he allegedly schemes to sell Mr. Obama's former seat.

The committee is supposed to recommend whether the full House should consider impeaching Blagojevich, and it has also reviewed allegations that he abused his power by defying legislative rulings, handing jobs to donors and ignoring procedures for awarding leases and contracts.

Blagojevich maintains he is innocent and will stay in office to fight the accusations.

Committee members have said that if they can't pursue the criminal charges, then their fact-gathering work is largely done. The panel will meet again next week so that Blagojevich's lawyer can respond to earlier witnesses.