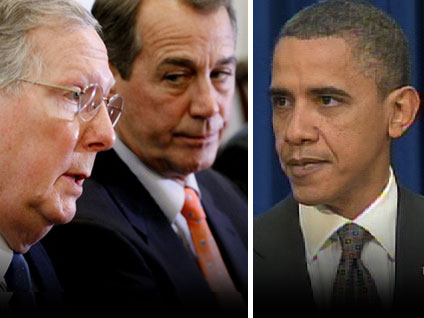 President Obama and top congressional Republicans emerged from a White House meeting today with an agreement to begin negotiations on a compromise to "break through this logjam," as the president put it, on how to extend the Bush-era tax cuts that expire at the end of the year.

"Today we had the beginning of a new dialogue that I hope and I'm sure most Americans hope will help break through the noise and produce real gains," the president said.

The two-hour meeting at the White House was the first sit-down between the president and Republican lawmakers since the midterm "shellacking" that cost Democrats the House. In what the president described as a "productive" session that also involved top congressional Democrats, lawmakers discussed the tax cuts as well as expiring unemployment benefits, potential ratification of the new START arms treaty with Russia and the deficit commission report out this week.

Republicans and Democrats have serious - and some say insurmountable - philosophical issues on all of these issues. Senate Republicans have been cool to ratification of START in the current Congress - the president insisted today "we need to get it done" - and have said they are unwilling to extend unemployment benefits, which expire today, unless the extension is paid for. The parties also have broad differences on how to address the budget deficit.

"None of this is going to be easy," the president acknowledged after the meeting. "We have two parties for a reason. There are real philosophical differences. Deeply held principles to which each party holds."

Republicans want to extend the Bush-era tax cuts for all Americans, while the president wants to extend them only on income below 200,000 for individuals or $250,000 for couples in order to reduce the cost of extending the cuts. The president said after the meeting he had appointed Treasury Secretary Tim Geithner and Jack Lew, the Director of the Office of Management and Budget, to oversee negotiations on finding common ground. He said he hopes for agreement "in the next couple of days."

Republicans struck an optimistic tone after the meeting, with soon-to-be House Speaker John Boehner saying the conversation was "very frank." He did not, however, signal that he is willing to compromise on the tax cut issue, stating that Republicans "made the point that stopping all the looming tax hikes" is what the economy needs.

Senate Republican leader Mitch McConnell said that from his perspective the two most important issues to be dealt with in the lame duck session of Congress are funding the government -- it will run out of money on Friday without at least a stopgap spending bill - and dealing with the Bush-era tax cuts. (Watch Mr. Obama's comments at left.)

He said the other issues on Senate Democrats' agenda - among them setting the stage for "Don't Ask, Don't Tell" repeal and passage of the DREAM Act, as well as START ratification - "aren't in the same category" as those issues. McConnell said the time had come to "reshuffle our priorities on the Senate side."

Mr. Obama he was "very encouraged" by what he perceived as a recognition among both Republicans and Democrats that their focus should be on helping Americans, not politics.

"We are Americans first, and we share a responsibility for the stewardship of our nation," he said. "The American people did not vote for gridlock."

The meeting had originally been scheduled for a week and a half ago, but Republicans objected to the date set by the White House. What was to have been a working dinner was downgraded to a morning meeting; what had been called a "summit" became the first in a series of meetings. It was a sign that neither side had high expectations for the gathering to yield positive results.

Mr. Obama acknowledged perceptions that the meeting would have little impact in his remarks, stating that often following such meetings "both sides claim they want to work together, but try to paint the opponent as unyielding and unwilling to cooperate."

"Both sides comes to the table. They read their talking points. Then they head out to the microphones trying to win the news cycle instead of solving problems and it becomes just another move in an old Washington game," he said.

This meeting, he insisted, was different.

"I think there was recognition today that that's a game that we can't afford," he said. "Not in these times."

Rep. Eric Cantor, another member of the GOP leadership present at the meeting, said he was "encouraged" that the president acknowledged in the meeting "perhaps not having reached out to us enough in the last session" of Congress. Boehner said he told the president that "spending more time [with us] will help us find some common ground."

McConnell said that divided government doesn't mean lawmakers can't get things done, pointing to what was passed under Democratic president Bill Clinton and a GOP Congress.

(At left, see a discussion of the meeting on CBSNews.com's "Washington Unplugged.")

"I think we all agree there's no particular reason why we can't find there isn't agreement and do some important things for the American people over the next two years," he said.

Also present at the meeting were Geithner, Lew, House Speaker Nancy Pelosi, Democratic Senate Majority Leader Harry Reid, Democratic Rep. Steny Hoyer, Democratic Sen. Dick Durbin and Republican Sen. Jon Kyl, the GOP point-person on the START treaty. Kyl wants to wait to take up the issue until the new Congress, which will have more GOP senators; Democrats worry that meeting the 67-vote threshold for ratification could be impossible once the new Congress begins. The White House has been lobbying Kyl hard to give ground on the issue.

On Monday, the president described the meeting as the "first step toward a new and productive working relationship" with Republicans. He also backed a spending freeze for federal employee pay, something members of the GOP have long been pushing.

While Republicans are unified in calling for an extension of all the Bush-era tax cuts, Democrats are split, with a faction led by New York Sen. Charles Schumer calling for the threshold for extension to be raised to $1 million in household income.

The White House has signaled that it is open to compromise on the issue, and a temporary (one to three-year) extension of all of the cuts appears likely, perhaps in exchange for an extension of unemployment benefits or a vote on START.