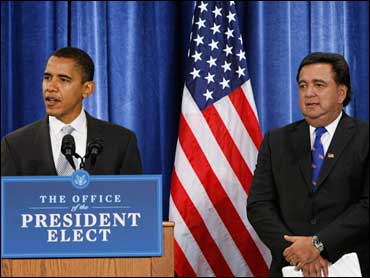 President-elect Barack Obama says it appears that the heads of the Detroit Three automakers are coming back to Congress with a "more serious set of plans" for how their companies are going to survive.

Mr. Obama says he's reserving comment until he sees what the automakers propose during hearings Thursday and Friday.

He says again that Congress was right last month to refuse to provide a bailout until the companies offered a clear plan for long-term viability.

Mr. Obama wouldn't offer an opinion on whether the bailout money should come from assistance packages already approved by Congress. He says he's more interested in seeing whether there's a "sound plan" in place.

The president-elect made the statements during a news conference where he named New Mexico Gov. Bill Richardson as commerce secretary, placing a second former campaign rival in his new Cabinet.

Talking optimistically despite the recession, Mr. Obama also said, "We have everything we need to renew our economy, we have the ingenuity and technology, the skill and commitment - we just need to put it to work."

Mr. Obama called Richardson a leading "economic diplomat for America. During his time in state government and Congress, and in two tours of duty in the Cabinet, Bill has seen from just about every angle what makes our economy work and what keeps it from working better."

Mr. Obama seemed in a lighthearted mood as he made the announcement. Asked about Richardson's recent decision to shave his beard, Mr. Obama joked that he was "deeply disappointed." He said he guessed Richardson decided to jettison the facial hair after his wife found it scratchy.

Richardson, 61, was United Nations ambassador and energy secretary during the Clinton administration, and he is in his second term as New Mexico's governor. He also served seven terms in the House of Representatives.

If confirmed by the Senate, he would take over a sprawling department that oversees the National Weather Service, the Census Bureau, economic development programs and more.

"In Richardson, the incoming president is getting an experienced hand - a former energy secretary, congressman and governor," said CBSNews.com senior political editor Vaughn Ververs. "He is also putting one of the nation's most visible Hispanic politicians into a prominent position in his cabinet, not an unimportant point for a fast-growing segment of the electorate. And by tapping Richardson, he's drawing yet one more former political rival for his team."

One of the nation's most prominent Hispanic politicians, Richardson pledged - in English and Spanish - to work to renew the economy.

If confirmed by the Senate, will become the latest former Democratic primary opponent to join Mr. Obama's Cabinet. The incoming chief executive has chosen another adversary-turned-ally, Hillary Rodham Clinton, to be his secretary of state. Mr. Obama also chose former rival Joe Biden as his vice presidential running mate.

Mr. Obama is considering another Hispanic politician, California Democratic Rep. Xavier Becerra, to be U.S. Trade Representative, according to two Democratic officials speaking on a condition of anonymity ahead of an announcement for the position.

New Mexico's Lt. Gov. Diane Denish, a Democrat will become the state's first female governor when Richardson leaves to assume his new post. Denish will take over for the remainder of Richardson's term, which runs through 2010.

In neighboring Arizona, the ascension of a Democratic governor will put the state in the hands of a Republican governor.

Under Arizona state law, the move of Gov. Janet Napolitano to secretary of Homeland Security will mean a Republican, Arizona Secretary of State Jan Brewer, will assume the reins there.

The president-elect has moved quickly to fill out his Cabinet, having named more than half of it in the month since he was elected the country's 44th president.

An energy secretary and United Nations ambassador in President Bill Clinton's administration, Richardson was a contender for the State Department job, but Obama offered him the post as commerce secretary after choosing the former first lady as his top diplomat.

Richardson sought the Democratic presidential nomination this year but eventually dropped out and endorsed Mr. Obama.

The upper echelon on his Cabinet now is in place.

Among those posts yet to be disclosed if not chosen: the heads of the Interior, Transportation, Labor, Energy, Housing and Urban Development, Education, Agriculture and Veterans Affairs departments. Mr. Obama also has yet to name his intelligence team, including his director of national intelligence and CIA chief.