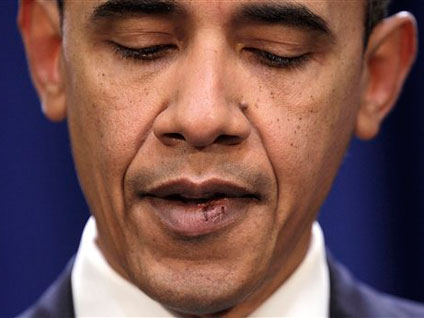 President Obama declared on Monday that he's ready to address Washington's toughest challenges in the coming months, like the national deficit. He's also once again ready to face his competitors on the basketball court.

"Washington is supposed to be a town of sharp elbows," the president joked today while giving a statement about a proposal to freeze pay for federal employees, "but it's getting a little carried away."

Mr. Obama received 12 stitches in his upper lip after getting elbowed in the mouth during a pickup basketball game Friday. Rey Decerega, director of programs for the Congressional Hispanic Caucus Institute, was responsible for the injury -- bringing the former high school player some new notoriety.

The president told reporters he's received a clean bill of health from his doctor and will continue to play basketball whenever he gets the chance.

"I played yesterday with Sasha and Malia, and they took it easy on me," he added.