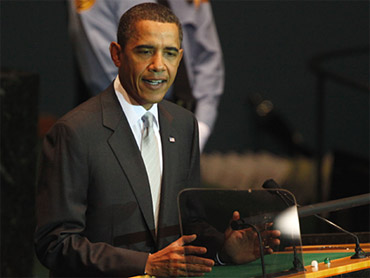 (AP Photo/Charles Dharapak)
President Obama devoted his debut at the United Nations with an address on climate change, calling it a "new era" and touting his administration's record since he took office in January.

"It is true that for too many years, mankind has been slow to respond to or even recognize the magnitude of the climate threat. It is true of my own country as well," Mr. Obama said at a climate change forum hosted by United Nation Secretary General Ban Ki-moon. "But this is a new day. It is a new era. And I am proud to say that the United States has done more to promote clean energy and reduce carbon pollution in the last eight months than at any other time in our history."

In an effort to combat some international criticism of U.S. efforts, Mr. Obama pointed to what he called the U.S.'s "largest ever investment in renewable energy" as well as actions taken to increase fuel economy in automobiles and the energy bill that passed the House in June, but has yet to be discussed in the Senate.

"These steps represent an historic recognition on behalf of the American people and their government. We understand the gravity of the climate threat. We are determined to act. And we will meet our responsibility to future generations," he added.

Before Mr. Obama spoke, Ban Ki-moon called on the 100 world leaders assembled "to accelerate the pace of negotations" to get a new global agreement at an upcoming summit on climate change in Copenhagen, Denmark, later this year.

Mr. Obama also spoke to the importance of battling global warming around the world.

"No nation, however large or small, wealthy or poor, can escape the impact of climate change. Rising sea levels threaten every coastline. More powerful storms and floods threaten every continent. More frequent drought and crop failures breed hunger and conflict in places where hunger and conflict already thrive," he said. "The security and stability of each nation and all peoples – our prosperity, our health, our safety – are in jeopardy. And the time we have to reverse this tide is running out."

In calling for global action, Mr. Obama noted that steps to fight climate change cannot take a back seat to efforts to reverse the global recession.

"Difficulty is no excuse for complacency. Unease is no excuse for inaction," he said. "We must not allow the perfect to become the enemy of progress. Each of us must do what we can when we can to grow our economies without endangering our planet – and we must all do it together."

Mr. Obama also put particular emphasis on developing nations and the need for them to do their part to reduce emissions, while also calling for richer nations to help with financial and technical assistance.

"Those rapidly-growing developing nations that will produce nearly all the growth in global carbon emissions in the decades ahead must do their part as well," he said. "We cannot meet this challenge unless all the largest emitters of greenhouse gas pollution act together. There is no other way."

This speech is the first of many meetings and encounters Mr. Obama will have with world leaders this week in New York, which includes another major address at the United Nations tomorrow and his first major attempt at Middle East peacemaking as he meets later today with both Israeli Prime Minister Netanyahu and Palestinian Authority President Mahmoud Abbas.