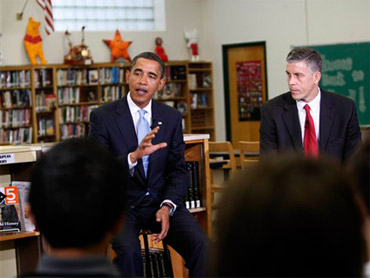 The Obama administration is committed to the school accountability at the heart of the No Child Left Behind law championed by former President George W. Bush but also wants to make changes, says Education Secretary Arne Duncan.

Duncan credited the law for shining a spotlight on children who need the most help, according to a speech prepared for delivery Thursday. No Child Left Behind pushes schools to boost the performance of minority and poor children, who trail their white peers on standardized tests.

Duncan agreed with critics that standardized tests are not ideal measures of student achievement. Yet "they are the best we have at the moment," Duncan said.

"Until states develop better assessments," he said, "we must rely on standardized tests to monitor progress."

Duncan noted the administration is giving states money through the economic stimulus law to come up with better assessments.

He planned to make the speech in a meeting at the Education Department with leaders of more than 160 groups. Thursday's was the first in a series of meetings with the groups. In his remarks, he said the administration wants their input before making a formal proposal.

Whatever the administration decides to do, it needs the approval of Congress, which passed the law with bipartisan support in 2001 but deadlocked over a rewrite in 2007. Lawmakers plan to try again in 2010.

Duncan said kids can't afford more delays. After nearly half a century of direct federal involvement in schools, he said, "we are still waiting for the day when every child in America has a high-quality education that prepares him or her for the future.

"We're still waiting, and we can't wait any longer."

While the law has helped improve the academic performance of many minority students, English-language learners and children with disabilities, critics say the law is too punitive: More than a third of schools failed to meet yearly progress goals last year, according to Education Week, a trade publication.

That means millions of children are a long way from reaching the law's ambitious goals. The law pushes schools to improve test scores each year, so that every student can read and do math on grade level by the year 2014.

Opponents say that the law's annual reading and math tests have squeezed subjects like music and art out of the classroom and that schools were promised billions of dollars they never received.