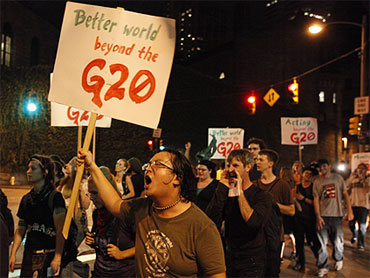 President Barack Obama has a message for world leaders gathering in Pittsburgh for the G-20 summit - the global economy needs more balance.

The Group of 20 top economies is scheduled to begin two days of meetings Thursday aimed at fining a common approach to advance a fledgling economic recovery and prevent new financial meltdowns.

Mr. Obama is set to tell world leaders that the global economy cannot continually rely on huge borrowing and spending by Americans and massive exports by countries like China. The president delivered a similarly themed message at the United Nations Wednesday when he said that America could not - though those comments were not directed specifically at the economy.

This is the third meeting of the G-20 in the aftermath of the financial crisis that plunged the world into fear a year ago. With the economies of the United States and many other countries under severe strain, world leaders largely agreed in April on remedies such as dramatic government stimulus.

The leaders will meet in a calmer atmosphere this time to discuss how to keep reinvigorating their economies without repeating earlier mistakes.

They face challenges, however, as they arrive with different priorities and less of an incentive to produce daring initiatives now that the global economy is slowly mending and the panic subsiding.

"Time is the enemy of reform," U.S. Treasury Secretary Timothy Geithner said Wednesday in Washington. "As some normalcy returns to our financial system and our economy, we cannot let it be cause for complacency."

The gathering includes older industrial powers along with major fast-growing developing economies such as China, India and Brazil.

For some, the meeting comes at a delicate time: German Chancellor Angela Merkel faces an election at home Sunday, and Japanese Prime Minister Yukio Hatoyama has been in office just over a week.

Dominique Strauss-Kahn, head of the International Monetary Fund, acknowledged in an interview with PBS' "News Hour with Jim Lehrer," that leaders were more amenable to working together when the world was scared.

"Will it last beyond the crisis?" he asked." "That's the big question. It has to for the sake of the global economy. Is it absolutely sure? I won't say.""

Mr. Obama wants the G-20 to agree to a new global framework that would force countries to radically change how they manage their economies and restrain dangerous imbalances that range from massive trade surpluses in countries like China, Japan and Germany, to massive trade deficits in the countries like the United States.

Many economists believe that it is such imbalances that helped bring about the world's economic crisis. However, China is resisting the rebalancing plan, fearing that it could be used to attack its trade surplus policies.

The U.S. president is hoping to mollify China by pushing to give it - and other emergency economies - a bigger voice in the International Monetary Fund. The G-20 has agreed in principle, but European governments worried about having to give up some of their IMF board seats and losing influence might resist the plan in practice.

The G-20 leaders have promised to adopt rules that would curb the kind of risky practices many believe prompted the current crisis. But there, too, opinions on how to go about it differ.

The United States is pushing a proposal to require banks to hold larger amounts of capital, the reserves they use to protect themselves against losses.

The Europeans are pushing a different approach: Germany's Merkel and French President Nicolas Sarkozy have sought caps on excessive bonuses paid to bankers, which they say rewarded risky behaviour.

France has moved to curb huge bonuses to its bankers, and is urging the other G20 nations and the European Union to follow suit so the French banking industry is not at a professional disadvantage.

The French president on Wednesday made yet another push for the measure in a speech to world leaders at the United Nations, and condemned "the behaviour of those who still continue to grow indecently rich, after leading the world to the brink of disaster."

And while the U.S. has urged G-20 countries not to scale back stimulus spending programs just yet, it will be hard to maintain such a stance in light of recent improvements in all the major economies.

On the issue of climate, Mr. Obama indicated he would use the G-20 summit to call for an end to extensive government subsidies that encourage the use of fossil fuels, such as oil, coal and natural gas, which are blamed for contributing to global warming. He will propose their gradual elimination, with the time frame to be determined, according to White House officials.

Many countries, including the U.S., provide tax breaks and direct payments to help produce and use oil, coal, natural gas and other fuels that spew carbon dioxide, the chief greenhouse gas. However, this proposal was likely to spark opposition from China and possibly some other major greenhouse gas emitters such as India and Russia.

Most of the G-20 leaders are coming to Pittsburgh from New York where they gathered first for the opening of the U.N. General Assembly. The choice of venue is interesting: Pittsburgh, a western Pennsylvania city devastated by the collapse of steel industry in the 1980s, and fared relatively well during recession - mostly on the strength of high technology and health care.

The summit is expected to from around the world.

As some leaders began arriving, police said 14 members of the environmental group Greenpeace were arrested on two bridges. They faced various charges, including possession of an instrument of a crime, disorderly conduct, conspiracy and obstruction.