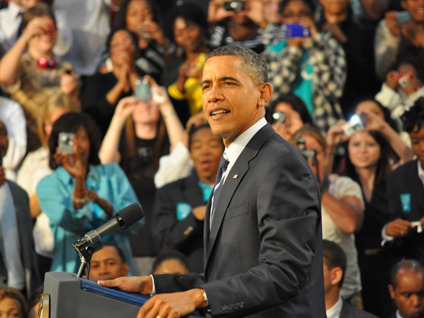 In the wake of what he described as a Democratic "shellacking" in last week's midterm elections, President Obama's favorability rating is experiencing a slight uptick, according to a recent Gallup poll.

In the poll, which surveyed 3,583 random adults from Nov. 5-7, 47 percent of respondents gave Mr. Obama a positive approval rating - up four points from a Gallup poll taken before the post-midterm period.

Gallup notes a number of possible reasons for the recent uptick, including Mr. Obama's post-election speech in which he "struck a mostly conciliatory tone"; a highly-publicized trip to India; a better-than-anticipated jobs report; and a market surge late last week.

Former presidents George W. Bush and Bill Clinton both lost favor among voters in the weeks following the midterm elections during which their parties experienced significant losses (2006 and 1994, respectively). Whether or not Mr. Obama's apparent boost in favorability is a trend or an anomaly is a quest to be answered in future polls.