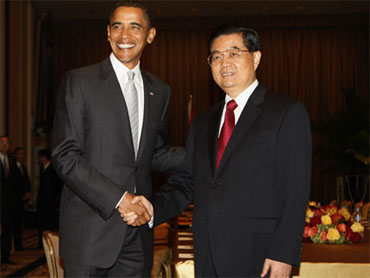 President Barack Obama and Chinese President Hu Jintao offered each other diplomatic assurances Tuesday at a testy time in their nations' complex relationship.

Obama said he was looking forward to visiting China in November, a trip that has long been expected as part of Obama's trip to Asia to attend a forum of Asia-Pacific leaders in Singapore.

"I'm committed to pursuing a genuinely cooperative and comprehensive relationship with China," Obama said, seated across a long table from his Chinese counterpart. "We need to make our relationship more dynamic and effective."

For his part, Hu said: "The Chinese side is willing to work with the United States to keep our bilateral relationship firmly along the right course." He said that included finding a way to "properly handle sensitive issues."

The two leaders sat down together on the sidelines of United Nations meetings just days after the U.S. slapped punitive tariffs on all Chinese-made tire imports. The move infuriated China at a time when Obama wants Beijing's help on climate change and nuclear standoffs with Iran and North Korea.

There was no direct mention of the flare-up by either leader Tuesday.