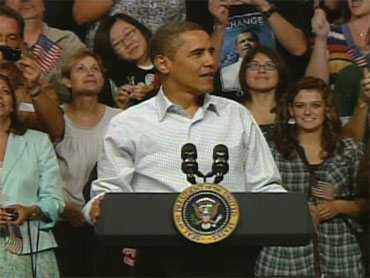 Eager to grab the megaphone from his opponents, President Barack Obama carried a reinvigorated pitch to overhaul and expand the nation's health insurance system in a trip Saturday to friendly territory.

It's another chance, said Knoller, for President Obama to make the case for his health care plan - his 5th time this week.

His address to more than 10,000 people at the Target Center was part of a weekend campaign by the White House to give the president as much exposure as possible after his prime-time address Wednesday to Congress.

Mr. Obama stressed that a government-run plan would be one of many options for people seeking affordable care. He said it will promote more competition and "no would be forced to choose it."

He also pledged that with a public option "no government bureaucrat or insurance company bureaucrat gets between you and the coverage that you need."

Mr. Obama said Washington's failure to pass health care reform "year after year, decade after decade, has placed a burden on families, on businesses, and on taxpayers. We can't stand it any longer."

It had all the feel of a campaign event, with People lined the streets as Mr. Obama's motorcade approached the site. Some in the crowd carried supportive signs, including one that referred to the late Sen. Edward M. Kennedy: "Carry The Torch of Kennedy."

"Are you fired up?" he yelled. They shouted back "Yes!"

Geraldine Keenan-Friday of Woodbury told CBS Station WCCO that the issue is too important to remain passive. The 44-year-old nurse said there is no way to craft a health overhaul plan that everyone will agree on, so the goal should be to forge something agreeable to most.

WCCO reported that a smattering of protesters outside the Target Center who oppose Obama's initiative - one woman carried a sign reading "Liar, Liar" - was roundly booed by those waiting to enter.

At the rally, on network television and on his weekend radio address, President Obama sought once again to take the reins of debate, a task that has proven elusive over the past three months.

In an interview for CBS' "60 Minutes" to air Sunday night, Mr. Obama said he'll be held responsible for any problems once a health care overhaul becomes law, so he has every reason to get it right.

"I have no interest in having a bill get passed that fails. That doesn't work," he told CBS' "60 Minutes" in .

In his weekly radio and Internet address, the president focused on government figures showing that nearly half of all Americans live without health insurance over any given 10-year period. He said the situation will worsen without the changes he wants and that losing coverage can happen to anyone.

"I intend to be president for a while and once this bill passes, I own it. And if people look and say, 'You know what? This hasn't reduced my costs. My premiums are still going up 25 percent, insurance companies are still jerking me around,' I'm the one who's going to be held responsible. So I have every incentive to get this right," he said in an excerpt of the CBS interview released Saturday.

A new Treasury Department analysis found that 48 percent of all people under age 65 go without health coverage at some point in a 10-year period. The data came from a study that tracked the insurance status of a sample of people from 1997-2006.

The report also found that 57 percent of those under 21 will find themselves without insurance at some point during a span of 10 years and that more than one-third of Americans will be without coverage for a year or more.

"I refuse to allow that future to happen," Mr. Obama said in his weekend message. "In the United States of America, no one should have to worry that they'll go without health insurance - not for one year, not for one month, not for one day.

"And once I sign my health reform plan into law, they won't," he added.

In the Republican address, Sen. John Cornyn said President Obama has rejected ideas that would bring the parties together around overhauling the system and ignored the American people's wishes. He criticized the cost and its long-term effect on the budget deficit, saying one of the House of Representatives bills works out to $2.4 trillion over 10 years, beginning in 2013.

Mr. Obama puts the cost of his plan at $900 billion for the period starting in 2010, when more revenue will be available right away.

"President Obama should work with Republicans on a bottom-up solution that the American people can support," Cornyn said. 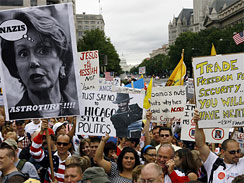 (AP Photo/Jose Luis Magana)
While President Obama pressed his case, in a protest against what they consider the government's out-of-control spending and interference in people's lives - including the president's health care approach.

Demonstrators held signs that said "I'm Not Your ATM" and "Obamacare makes me sick."

The Minneapolis rally was the latest move in the campaign Mr. Obama promised as he seeks to overhaul a costly health care system he says will bankrupt the country and leave millions more people without needed coverage if left unchanged.

He followed Wednesday night's nationally televised health care speech with a day of events at the White House, including more remarks on health care, a Cabinet meeting dominated by the topic and a meeting with moderate Senate Democrats.

President Obama planned to continue the focus in the week ahead: a speech Tuesday in Pittsburgh at the AFL-CIO convention, where the need for health care overhaul will be an overriding theme, and a rally Thursday in a Washington suburb.

In his televised speech to the nation, Mr. Obama spelled out what he'd like to see in the health overhaul bill he wants: coverage expanded to most of the nearly 50 million uninsured, new requirements for people to get insurance, new prohibitions against insurance company practices like denying coverage because of a pre-existing condition and creation of a new marketplace, or exchange, where consumers could shop for coverage.