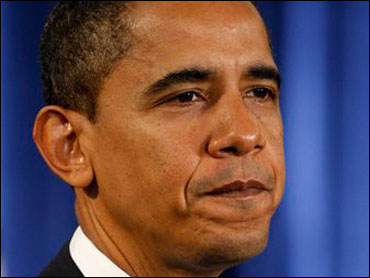 President-elect Barack Obama attempted to clear both himself and his staff of any taint connected with charges the Illinois governor put Obama's Senate seat up for sale, saying Thursday he was "absolutely certain" there was no involvement with the alleged dealmaking.

Illinois Gov. Rod Blagojevich was arrested Tuesday on charges that he put Obama's seat up for bidding. The governor has ignored calls for his resignation and retains the power to appoint Mr. Obama's replacement.

Mr. Obama also said once again that he had no discussions about the seat he is vacating with the Democratic governor.

"I have never spoken to the governor on this subject," he said. He bluntly called for the Illinois Democrat to resign.

"I was as appalled and disappointed as anyone," Mr. Obama added at a news conference called to announce a series of new appointments to the administration he is setting up.

He also for the first time addressed the issue of whether his transition staff had any contacts.

"I am confident that no representatives of mine would have any part of any deals related to this seat," Mr. Obama said. "I think the materials released by the U.S. attorney reflect that fact." As to whether any aides were involved in Blagojevich's alleged dealmaking schemes, he said he was "absolutely certain" they were not.

Mr. Obama did say: "I've asked my team to gather the facts of any contacts with the governor's office about this vacancy so that we can share them with you over the next few days."

Of interest will be the activities of soon-to-be White House Chief of Staff Rahm Emanuel, a veteran of Chicago politics and past associate of Blagojevich, reports CBS News correspondent Dean Reynolds. Emanuel was not standing in his customary spot at Mr. Obama's press conference today.

Also of interest is Valerie Jarrett, a confidante of Mr. Obama's now destined for the White House staff. She is mentioned on page 60 of the criminal complaint as "Senatorial Candidate Number 1" in a conversation that has Blagojevich allegedly plotting to win a Cabinet post for himself by naming her to the Senate, reports Reynolds.

Mr. Obama said "I think the public trust has been violated" and said he did not think that the governor "at this point can effectively serve" Illinois.

He also said he wants to make sure the selection of a new senator isn't tainted.

Mr. Obama said neither he nor his staff had been contacted by federal officials in connection with the probe.

Also at the news conference, he introduced former Senate Majority Leader Tom Daschle as his choice to be secretary of health and human services and said he favored congressional passage of short-term loans to rescue the U.S. auto industry.

"The President-elect is quickly discovering how a political scandal like this can impair his ability to deliver a message," said CBSNews.com senior political editor Vaughn Ververs. "In a press conference called to announce his choice for Secretary of Health and Human Services, three of the four questions asked were instead focused solely on the Illinois governor. Even while there is no evidence that he or members of his team are involved in any impropriety, the fact that Obama said his staff is still gathering facts about what contacts might have been made means this story will continue to touch his transition as he prepares to take office."

Mr. Obama said he worries about the public perception of political leaders as a result of scandals such as the one now surrounding Blagojevich.

He said scandals like the one in his state does a disservice to "many of us on both sides of the aisle who have upheld the highest standards."

He said the public deserves to know that "any vacancy will be filled in an appropriate way."

"Let me say that this Senate seat does not belong to any politician to trade. It belongs to the people of Illinois, and they deserve the best possible representation," Mr. Obama said.