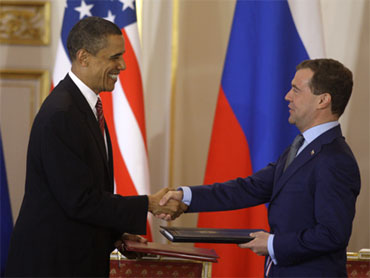 Obama told reporters on Thursday the stakes for America are high, and that there is no higher national security priority for Congress to address. He spoke during a meeting with top aides and key backers of the pact, including former secretaries of state Madeleine Albright, James Baker and Henry Kissinger, and former defense secretaries William Cohen and William Perry.

Opposition to the START nuclear arms reduction treaty has been building among Senate Republicans, but they are now facing a rebuke from their colleagues, political opponents and predecessors.

The START treaty would reduce U.S. and Russian strategic warheads to 1,550 for each country from the current ceiling of 2,200. It also would set up new procedures to allow both countries to inspect each other's arsenals to verify compliance.

Sen. Richard Luger of Indiana, the ranking Republican on the Senate Foreign Affairs Committee, issued a stinging public statement against members of his own party, accusing them of being intentionally obstructionist on arms reduction for political gain and also imperiling national security, reports Foreign Policy magazine.

"At the moment, the Republican caucus is tied up in a situation where people don't want to make choices," Lugar told reporters in the hallway of the Capitol building Wednesday. "No one wants to be counted. No one wants to talk about it. If you're a Republican, you anticipate that the lay of the land is going to be much more favorable in January and therefore would say, 'If we do not have to make tough choices now, why make tough choices?'"

If START fails, the cooperation between the United States and Russia on securing loose nukes could be imperiled, representing an even bigger risk for national security, Lugar said.

Meanwhile, at the White House, President Barack Obama summoned a number of former secretaries of defense and state, Republicans and Democrats, to rally support for the imperiled agreement, the Associated Press reports.

Sen. Jon Kyl of Arizona, a leading Republican voice on the issue, has been vocal in his opposition to the START treaty's ratification this year, claiming more focus needs to be put on modernizing our remaining arsenal.

Sixty-seven votes are needed for the treaty's approval, and since many GOP members follow Kyl's lead on nuclear arms issues, there is a lot of work left to be done to get it passed.

The administration's hopes suffered another hit when Republican Sen. George Voinovich, an Ohio moderate who is retiring this year, expressed his reservations about the treaty, the AP reports.

"America's grand strategy approach towards Russia must be realistic, it must be agile, and as I have said it must take into account the interests of our NATO allies," Voinovich said in a statement. "I am deeply concerned the New START Treaty may once again undermine the confidence of our friends and allies in Central and Eastern Europe."

Sen. Kerry said there were no substantive disagreements on the treaty itself and that a major objection of Kyl's should have been removed when the administration pledged an additional $4.1 billion for weapons modernization programs, the AP reports.

Obama, in speaking to reporters Thursday, said there will be a crucial arms verification aspect to the TREATY, that will allow inspection of the Russian arsenal and go a long way towards securing loose nukes.

Invoking the words of Ronald Reagan, Obama said, "We have to trust, but verify."