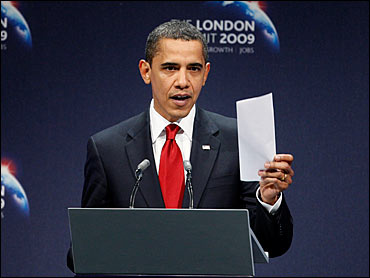 (AP Photo/Kirsty Wiggl)
White House Press Secretary Robert Gibbs told reporters on Air Force One this morning that President Obama has not yet put the finishing touches on his planned address this evening to a joint session of Congress.

"He's still working on it," Gibbs said. "…he came back from Camp David Monday with many handwritten pages of notes that he gave to the speechwriters. He got another draft incorporating more edits last night, and worked on it with the speechwriters before he left this morning. So my sense is he'll be tinkering with this some this afternoon, but my sense is this thing will be locked sometime this afternoon."

Gibbs also spoke of Mr. Obama's "main goals" in the address, which he said are "to speak clearly to the American people about what's in health care reform; for those that are fortunate to have insurance, to demonstrate for them that his plan will bring them security and stability; and for those that don't have health insurance, that we'll provide an affordable way for them to get accessible insurance."

In an interview on ABC's "Good Morning America" today, the president blamed himself for leaving "too much ambiguity out there" on his health care plan, reports CBS News White House correspondent Mark Knoller.

Mr. Obama said ambiguity in his plan allowed "opponents of reform to come in and to fill up the airwaves with a lot of nonsense."

Asked about the political climate, Mr. Obama said "there is still just this unyielding partisanship. In some ways, I think it's gotten worse."