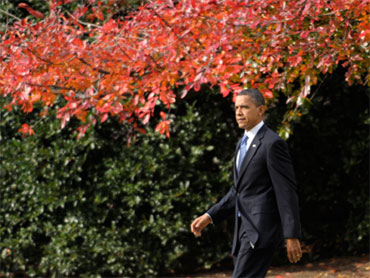 The auto industry is providing President Barack Obama a good-news story - automakers are making money, plants are hiring and the taxpayers' stake in General Motors is dwindling. Things are looking up for the president in assembly line country - just not the voting.

Obama, fresh from claiming vindication after last week's GM public stock offering, is joining Vice President Joe Biden on Tuesday at a Chrysler auto plant in Kokomo, Ind. This month in Indiana, Democrats lost a Senate seat and two House seats and were driven into the minority in the state legislature.

While Obama is embarking on a mission GM Stock IPO SuccessfulGM No Longer "Government Motors"It's a sign of the enormous challenge facing Obama over the next two years. Unless the economy shows dramatic improvement, incremental gains such as a stabilizing the auto industry or recouping much of the money used to bail out giant financial firms are not big political winners.If that weren't enough of a challenge, Obama was awakened at 3:55 a.m. Tuesday with news that North Korea had launched an artillery attack on a South Korean island, escalating the communist nation's already provocative acts. The event threatened to overshadow the White House's carefully planned economic theme of the day.

Senior White House adviser David Axelrod said in an interview Monday that the White House understood Americans' frustrations over the economy. "Until we get that momentum going to the point where we can fill in that huge hole the recession created, people are going to be frustrated," he said.

And while Obama and his aides have repeatedly asserted that without the government's intervention the economy would be in a sorrier state, few in the White House would argue that that's a winning political soundbite. As Obama himself said on "60 Minutes" earlier this month, "The hardest argument to make in politics is: Things would have been a lot worse if we hadn't done all those, taken all these steps."

GM has given the administration some bragging rights, at least for now.

The company launched one of the largest initial public offerings in U.S. history last week, more than a year after it was pushed into bankruptcy by the Obama administration and two years after the Bush administration propped it up with billions of dollars in loans. All in all, the taxpayers' stake totaled about $50 billion.

But the auto rescue came amid bailouts of big banks and financial companies - interventions that Republicans attacked and many in the public resented.

As signs of the auto industry's recovery began to emerge last summer, Obama traveled to GM, Ford and Chrysler plants in Michigan and Illinois to highlight local success stories.

But that did nothing to ease the voter anger that was spreading.

And many Republicans still cast the rescue effort as a mistake.

"Government needs to stay out of those things," Texas Gov. Rick Perry, the new chairman of the Republican Governors Association, said on "Fox News Sunday."

For Obama, the trip to Kokomo is a chance not only to respond to his bailout critics, but also to promote the $800 billion economic stimulus he pushed through Congress in the early days of his presidency.

Declared one of "America's fastest-dying towns" by Forbes magazine in 2008, Kokomo hit bottom in June 2009 when unemployment in that midsize city in north-central Indiana reached 20.4 percent. Unemployment is still higher than the national average, but it dropped by nearly 8 percentage points to 12.7 percent in September.

Still, the local congressman, Democrat Joe Donnelly, who won re-election in 2008 with 67 percent of the vote, barely survived his race this year.

"What really blows my mind is, I don't know if people realize what would have happened to Kokomo, Ind., if Chrysler wouldn't have gotten the bailout," said Jerry Price, the vice president of United Auto Workers Local 685.