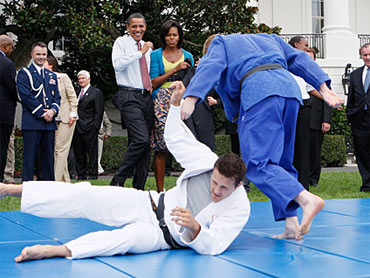 (AP Photo/Charles Dharapak)
President Obama and first lady Michelle Obama today hosted a rally at the White House Wednesday in support of the effort by his hometown of Chicago to win the right to host the 2016 Summer Olympic Games.

"We want [the Games] in the heart of our proud city -- the city that opened the way westward in the 19th century, that showed the way skyward in the 20th century, and that is leading the way forward in the 21st century," the president said. "So Chicago is ready. The American people are ready. We want these Games."

Chicago is one of four cities in the running to be awarded the Games on October 2nd. (The others are Rio de Janeiro, Madrid and Tokyo.) Mr. Obama has opted not to travel to Copenhagen, where the decision will be made, so that he can continue working on health care reform efforts at home. In the past world leaders have personally lobbied successfully for the Games.

The president said he is "sending a more compelling superstar to represent the city and country we love" before the International Olympic Committee, the first lady. Mrs. Obama and Valerie Jarrett are set to represent the United States in Copenhagen. 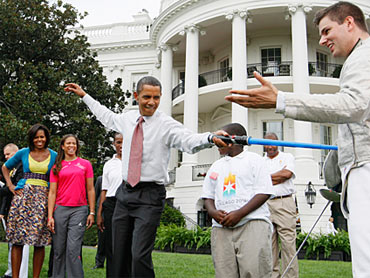 (AP Photo/Charles Dharapak)
The event featured athletes staging demonstrations on the White House's south lawn in judo, gymnastics and fencing. The first lady quipped in her remarks that Mr. Obama's attempt at fencing before the event started was "pathetic," though she said "he passed the baton really well."

"I know that Barack and I would feel such tremendous pride to see the Olympic torch burning brightly in the city that we love so much," she said while making the case for the host city. 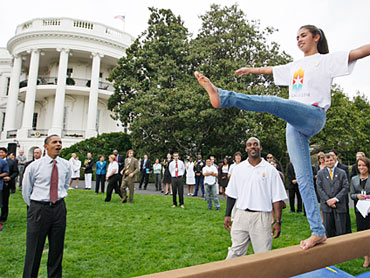 (AP Photo/Charles Dharapak)
The president called Chicago "a city of broad shoulders and big hearts and bold dreams; a city of legendary sports figures, legendary sports venues, and legendary sports fans; a city like America itself, where the world -- the world's races and religions and nationalities come together and reach for the dream that brought them here."

Chicago Mayor Richard Daley also attended the event, which was also on behalf of the Paralympic Games, held in conjunction with the Olympics.

"If you choose Chicago, I promise you this: Chicago will make America proud, and America will make the world proud," the president said.