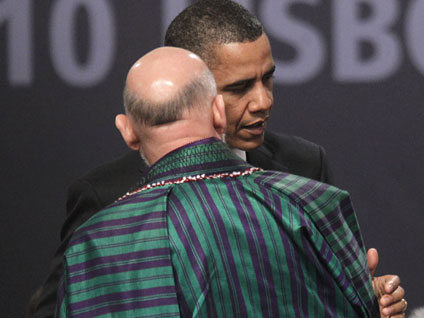 LISBON -- President Obama returned home from the NATO summit confident of allied support for the U.S. led strategy in Afghanistan but he also signaled the American combat role could go beyond 2014. That is his stated target date to end to the type of combat missions happening now in Afghanistan. He would not rule out the prospect of U.S. troops remaining on combat duty after that time. He told reporters, "It's hard to anticipate what will be necessary to keep Americans safe in 2014."

So much depends on when and if the Afghan military can protect the entire war torn country.

NATO formally agreed to end the combat mission by the end of 2014. NATO countries would continue to offer support and training for Afghan forces. Secretary General Anders Fogh Rasmussen said allied troops would stay as long as it takes to get the job done.

NATO leaders repeatedly described the way forward as "a transition" process. That choice of words and he overall strategy are aimed at reassuring wary U.S. voters and Europeans that a process to wind down the war would soon be underway. President Obama plans to start a gradual troop withdrawal in July of 2011. Critics contend that the very public plan to start the pullout next summer will empower the Taliban and its followers. NATO chief Rasmussen said, "If the enemies have the idea that they can just wait it out until we leave, they have the wrong idea."

On the sidelines of the Lisbon summit, the president held his first face-to-face meeting with Afghan leader Hamid Karzai in six months. By all accounts, it was a cordial session. With reporters present, Karzai complimented the president on the tone of his remarks on Afghanistan during the NATO session.

The president thanked the Afghan leader and noted, "Every once in a while, I do things right."

At the news conference that followed his NATO and private meetings with Karzai, Mr. Obama acknowledged the Afghan leader's concerns about civilian casualties and detentions. He said, "I don't fault President Karzai for raising those issues. On

the other hand, he's got to understand that I've got a bunch of young men and women ... being shot at and having to traverse terrain filled with IEDs (improvised explosive devices) and they need to protect themselves." The president added, "If we're setting things up where they're just sitting ducks for the Taliban, that's not an acceptable answer either."

An estimated 100,000 U.S. troops are stationed in Afghanistan.

The president is set to receive a long-awaited review of the Afghanistan war policy next month. The report will assess progress a year after Mr. Obama announced his plan to send an additional 30,000 troops to the war zone.

Nearly 1,400 Americans and 826 soldiers from other Nato countries have died in Afghanistan since the start of the war in 2001.