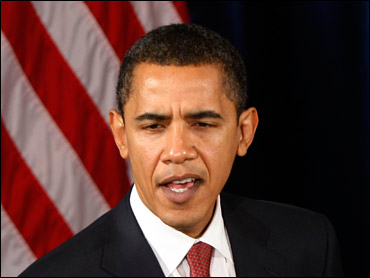 President-elect Barack Obama said Monday a review by his own lawyer shows he had no direct contact with Illinois Gov. Rod Blagojevich about the appointment of a Senate replacement, and transition aides did nothing inappropriate.

Mr. Obama pledged to make the review public, but decided to hold off because prosecutors asked for a delay and "I don't want to interfere with an ongoing investigation." U.S. Attorney Patrick Fitzgerald released a statement confirming the request.

Mr. Obama, fielding questions at a news conference, sidestepped when asked whether Emanuel had spoken with aides to the governor about potential Senate appointees.

Emanuel was one of several aides who watched the news conference from the wings.

The president-elect pledged the results of the investigation by his incoming White House counsel, Gregory Craig, would be released "in due course."

He said the probe was complete and thorough, but did not say which of his aides Craig interviewed, whether any of them was under oath at the time, or any other details.

In personally disclosing the results of the investigation he ordered, Mr. Obama said, "As I said in a press conference last week, I had no contact with the governor's office and I had no contact with anybody in the governor's office. What I indicated last week was there was nothing that my office did that was in any way inappropriate or related to the charges that have been brought."

Blagojevich has authority under Illinois state law to name a Senate replacement for Mr. Obama, who resigned his seat as he prepares to become president. Senate Democrats have warned the governor not to use his power, hinting they may refuse to allow his selection to take the oath of office.

A Blagojevich spokesman said he may sign a bill for a special election to pick Mr. Obama's Senate successor instead of naming that successor himself, reports CBS News correspondent Dean Reynolds.

However, election officials statewide say they don't have the money to pay for a special election.

Separately, Blagojevich has come under heavy pressure to resign, from Mr. Obama as well as Democrats nationally and in Illinois. Earlier in the day, the Legislature took the first step toward possible impeachment.

"This isn't about the legal process, this is about the governor being unable to govern right now," Illinois Rep. Jan Schakowsky said on CBS' The Early Show.

Mr. Obama held his news conference shortly after his transition office released a statement by spokesman Dan Pfeiffer saying the internal review had found no wrongdoing.

Like the president-elect, the statement left several issues uncovered.

It did not say whether Emanuel was heard on a wiretap providing the governor's top aide with a list of names that the president-elect favored. Nor did it say who, if anyone, on Mr. Obama transition's team had made contact with the governor or his aides concerning a replacement for Mr. Obama or whether Craig interviewed people under oath, or to whom he talked.

Mr. Obama appeared before reporters to announce his environmental and natural resources team.

It was disclosed last week that he selected Steven Chu for energy secretary, Lisa Jackson for Environmental Protection Agency administrator, Carol Browner as his energy and climate "czar," and Nancy Sutley to lead the White House Council on Environmental Quality.

Separately, officials familiar with the selection of Obama's Cabinet said the president-elect has selected Chicago schools chief Arne Duncan as education secretary. These officials spoke on condition of anonymity, saying they were not authorized to disclose any personnel decisions not yet announced.

The president-elect's transition office said the meeting was held to discuss opportunities and challenges around the globe and was designed to help the new administration hit the ground running as of Inauguration Day, Jan. 20.

In recent days, Mr. Obama's staff has declined to respond even to basic questions about the Blagojevich review, like how long it would take, who was leading it and what issues were explored.

Two people who have been briefed on the investigation had told The Associated Press that Emanuel is not a target of the probe. They spoke on condition of anonymity because the criminal investigation is ongoing. One is a person close to Emanuel, who said he has been told by investigators that he's not a subject of their probe.

There are no suggestions that Mr. Obama or his aides were involved in the alleged sale of his seat. Fitzgerald has said prosecutors were making no allegations that Mr. Obama was aware of any scheming. And Blagojevich himself, in taped conversations cited by prosecutors, suggested Mr. Obama wouldn't be helpful to him and called him a vulgar term. Even if the governor were to appoint a candidate favored by the Obama team, Blagojevich said, "they're not willing to give me anything except appreciation."