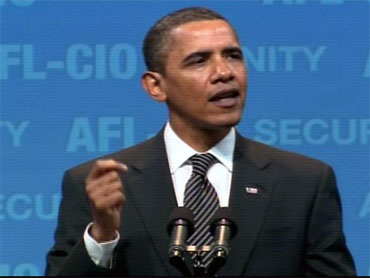 Walking into a raucous ovation, President Obama actually appeared to be touched by the reception he was given at the AFL-CIO convention in Pittsburgh.

"You're making me blush," he said, uttering a series of "thank yous" for the prolonged applause that greeted Mr. Obama at this campaign rally-like event.

"You know, the White House is pretty nice, but there's nothing like being back in a house of labor," he added, to even more applause.

Introducing the president was outgoing AFL-CIO head John Sweeney, who declared that labor is the wind behind the president's back in his fight for health care.

He also took a swipe at some of the opponents to health care, calling some their language "Outrageous disrespect for Barack Obama, the presidency itself and the millions of Americans who elected him."

Mr. Obama stopped midway through his speech to acknowledge an admirer in the crowd. "I love you too sister," he said, before noticing her rough voice, "it sounds like you've been hollering too much."

Turning to health care, Mr. Obama once again defending the public option as one part of the health care reform plan, and again got a raucous round of applause. He went to attack misinformation about how he's going to pay for the reform and what it would mean to Medicare beneficiaries.

"Don't pay attention to those scary stories about how Medicare benefits will be cut," he said. "That will never happen on my watch. We will protect Medicare so it's a safety net our seniors can count on - today, tomorrow, and forever. Not a dollar from the Medicare Trust Fund will be used to pay for this plan - not a dollar."

Closing his remarks, the president returned to campaign rhetoric – though the campaign is now about getting his agenda through Congress, with the help of the loyal labor crowd.

Obama: Automakers Getting Back In Game

Robert Hendin is a CBS News White House producer. You can read more of his posts in Hotsheet here.