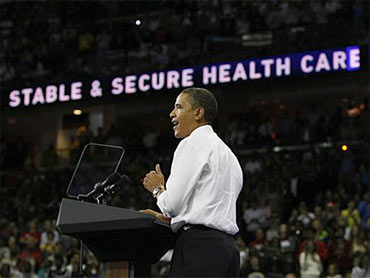 (AP Photo/Charles Dharapak)
President Obama on Thursday traveled to the University of Maryland in College Park to rally some of his most ardent supporters – young people – and explain to them why they should feel obliged to participate in a health care system that largely pays for the care of the elderly.

Adding more young people to health insurance pools is an essential part of financing reform, as the Washington Post reports.

The president said on Thursday, however, that students would not just shoulder the cost of reform but also benefit from it. The one in three young adults who do not have health insurance "live one accident or one illness away from bankruptcy," he said.

"Some of these Americans don't get insurance because they feel young and healthy," Mr. Obama said. "But some work part time or work at businesses that don't have health coverage."

Under his reforms, Mr. Obama said, children will be able to stay insured through their parents' coverage until they are 26 years old. Another proposal under consideration, he said, is to allow people under 25 to buy low-cost insurance.

The president received an enthusiastic reception from the audience, but it was not all positive. One person was reportedly escorted out of the rally after shouting, "Obama you're a liar. Obama, your health care kills children. Abortion is murder." The disruption prompted the president to pause for a moment.

There were also some jeers mixed in with cheers and applause at the mention of the latest health care bill to be released out of the Senate Finance Committee.

"We are now closer to reform than we have ever been," Mr. Obama said, noting the different committee bills.

"Each bill has its strengths and there are a lot of similarities between them," he said.

The president briefly mentioned that he has supported the idea of a government-run health insurance option, or "public option." While the crowd reacted with applause to the idea, the president quickly moved on.

He told students to listen to the doctors and nurses supporting health care reform. The nonprofit group Health Reform USA published on Thursday an open letter (PDF) to Congress asking for reform. The letter is signed by 400 medical leaders, such as William Roper, the dean of the UNC Chapel Hill School of Medicine; Charles Kahn, the president of the Federation of American Hospitals; and James Block, the former president of John Hopkins Hospital.

"Some of the people who are most enthusiastic about health care reform are medical professionals who have firsthand knowledge" of its flaws, the president said.

The president ended the rally with a campaign-style chant of "Fired up, ready to go," and told the college students, "I need your voice. Let's go change the world."