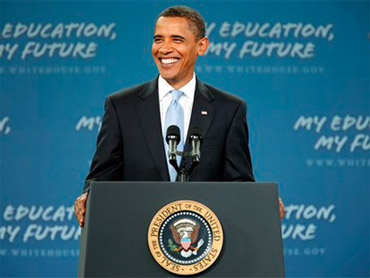 Take responsibility for your education. Go to class and listen. Don't let failures define you. That's the advice President Barack Obama gave schoolchildren Tuesday in a speech that drew fire from conservative critics even before he delivered it.

"At the end of the day, we can have the most dedicated teachers, the most supportive parents, and the best schools in the world," Obama said. "And none of it will matter unless all of you fulfill your responsibilities."

The president delivered the talk from Wakefield high school in Arlington, Va. The White House posted Obama's remarks on its Web site at midday Monday.

Obama's talk has proven controversial, with some critics calling for parents to have their children boycott the speech amid accusations that Obama is using schools to push a liberal agenda. White House officials, including Education Secretary Arne Duncan, have said the allegations are silly.

The president got a bit of a boost from former first lady Laura Bush, wife of Obama's Republican predecessor, on Monday when she said she supported Obama's decision to address America's school children.

"There's a place for the president of the United States to talk to school children and encourage school children" to stay in school, Mrs. Bush, a former school teacher, said in a CNN interview.

However, she said believes that parents who were plan to keep their children home because of the president's address had the right to do so.

Florida Republican party chairman Jim Greer, who said last week he was "absolutely appalled that taxpayer dollars are being used to spread President Obama's socialist ideology," said Monday he now favored the speech after changes he said the White House, under political pressure, had made to supporting materials for teachers and to the speech itself.

Obama made no reference in his prepared remarks to the uproar surrounding his speech. Nor did he make an appeal for support for tough causes such as his health care overhaul. He used the talk to tell kids about his at-times clumsy ways as a child and to urge them to set goals and work hard to achieve them.

"At the end of the day, we can have the most dedicated teachers, the most supportive parents and the best schools in the world," Obama said. "And none of it will matter unless all of you fulfill your responsibilities."

Schools did not have to show the speech. And some districts decided not to, partly in response to concerns from parents.

The education secretary has acknowledged that a section about writing to the president on how students could help him meet education goals was poorly worded and has been changed.

In his remarks, Obama also left students with some words of encouragement.

"I expect great things from each of you," he said. "So don't let us down. Don't let your family or your country or yourself down. Make us all proud. I know you can do it."