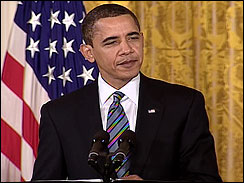 in his commencement speech at the historically black college on Sunday, Obama said the graduates had an added responsibility to be role models and mentors in their communities.

When the time comes, Obama said, they must pass the sense of an education's value on to their children, along with a sense of personal responsibility, self-respect and the "intrinsic sense of excellence that made it possible for you to be here today."

But that boilerplate caution, a familiar theme at commencement time, likely will get overshadowed by the president's remarks concerning high technology and its potentially negative impact on politics and civil society.

"You're coming of age in a 24/7 media environment that bombards us with all kinds of content and exposes us to all kinds of arguments, some of which don't always rank all that high on the truth meter," Obama said. He added that "with iPods and iPads and Xboxes and PlayStations, -- none of which I know how to work -- information becomes a distraction, a diversion, a form of entertainment, rather than a tool of empowerment, rather than the means of emancipation."

Elsewhere, Obama recalled the university's humble beginning in September 1861 as a school for escaped slaves who sought asylum after fleeing nearby plantations in the Confederate South. Obama said the founders recognized that, with the right education, such barriers as inequality would not persist long into the future.

"They recognized, as Frederick Douglass once put it, that 'education means emancipation.' They recognized that education is how America and its people might fulfill our promise,'' said Obama, the first black U.S. president.

Drawing parallels to current challenges, Obama noted that Hampton's graduates are leaving school as the economy begins to rebound from its worst downturn since the 1930s, and as the U.S. wages wars in Afghanistan and Iraq.

Obama, who is pouring tens of billions of dollars into K-12 and higher education with an eye on raising standards and building the future workforce, said education can help graduates manage the uncertainties of a 21st century economy.

For much of the last century, a high school diploma ``was a ticket to a solid middle-class life,'' he said. But no more, as jobs today often require at least a bachelor's degree or higher.

"The good news is, all of you are ahead of the curve,'' Obama told the graduates. ``All those checks you wrote to Hampton will pay off.'' But too many others, he said, including disproportionate numbers of blacks and Hispanics, are unprepared and are outperformed by their white classmates in the U.S. and around the world.

"All of us have a responsibility, as Americans, to change this, to offer every single child in this country an education that will make them competitive in our knowledge economy. That is our obligation as a nation," the president said.

(The Associated Press contributed to this report.)