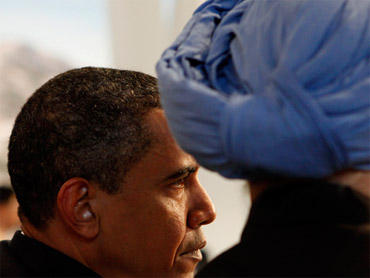 And the first state dinner of President Barack Obama's administration goes to ... India.

Indian Prime Minister Manmohan Singh is coming to the United States for a state visit Nov. 24. Such visits include an elaborate arrival ceremony on the White House South Lawn, one-on-one time with the president and, in the evening, a state dinner.

It is a plum presidential nod of recognition for the world's largest democracy and most stable U.S. ally in a hostile corner of the world.

But why India first?

It was just four years ago that President George W. Bush and Singh raised their glasses and toasted the U.S.-India relationship at the start of a July 2005 state dinner.

Indian officials, however, have watched warily since then as the U.S. has become more engaged with its archrival, Pakistan, focusing on greater military cooperation in dealing with Islamist extremists there and in neighboring Afghanistan. Honoring Singh with what is considered one of the grandest and most glamorous of White House affairs 10 months into Obama's presidency may allay some of those concerns, along with perceptions that Pakistan has surpassed India as America's best friend in South Asia.

It also may be Obama's way of closing the loop with all the major U.S. allies as his first year in office draws to a fast close.

Obama's first-year international itinerary has taken him to the major European power centers of Britain, France, Germany, Italy and Russia. He has toured the Middle East and is scheduled to visit China and possibly other Asian countries in November, before Singh visits.

The president has even scheduled a day trip to Copenhagen this week - he will spend more time in the air than on the ground - in a bid to personally boost his adopted hometown's chances of bringing the 2016 Olympic Games to Chicago.

Secretary of State Hillary Rodham Clinton hand-delivered the state-visit invitation from Obama during her July trip to India.

Singh, re-elected to a second term earlier this year, and Obama met on the sidelines of a London economic summit in April, and discussed cooperating on the economic downturn, climate change and counterterrorism. Obama later called him a "very wise and decent man."

After years of mutual wariness during the Cold War, U.S.-Indian relations are at a high point, thanks partly to the Bush administration's push to allow American civilian nuclear trade with India. The Obama administration has used that accord as a foundation for improving ties and hopes of cooperation on the president's priority issues, such as climate change and countering terrorism.

"We are very committed to this relationship," Clinton said of India when questioned about deepening U.S. relations with Pakistan.

But a trip to India so far has escaped the sights of the president's travel planners.

That is where the state dinner comes in.

Obama's first one will be the talk of the town, perhaps second only to his inauguration and the parties that followed in terms of celebrity star power and got-to-be-there fever.

A ton of planning is involved, from creating the invitation itself to compiling a guest list. Meals, desserts and wines are tasted until the right pairings are found. Flowers must be chosen and arranged just so, along with the seating, place settings and entertainment.

Responsibility for the planning falls to first lady Michelle Obama and her staff, and people will be waiting to see what twists she and her social secretary, Desiree Rogers, will put on one of the White House's most staid traditions.

Early state dinner rumblings after Obama took office were about opening the events up to "real people."

Inquiring minds also want to know what other changes may be in store. Will they eat in the State Dining Room or shift chairs to the larger East Room? Will dinner courses be prepared with vegetables pulled from Mrs. Obama's popular South Lawn garden?

Would they consider putting their well-dressed guests on boats headed down the Potomac River to Mount Vernon? John F. Kennedy did that for his first state dinner a just few months into his term, in May 1961, for the president of Tunisia.

Or how about dinner and black-tie inside a big tent in the Rose Garden? Bill Clinton did that for his first such dinner a year and a half into his presidency, in June 1994, for the Japanese emperor.

Bush held his first dinner eight months in. It was for Mexico, less than a week before the terrorist attacks of Sept. 11, 2001.