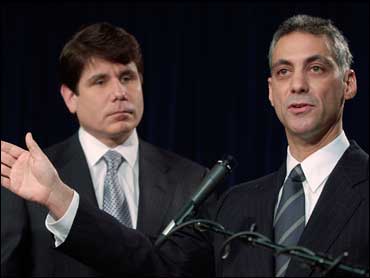 President-elect Barack Obama will offer details early this week about his transition staff's contact with Illinois Gov. Rod Blagojevich, who is facing federal charges of plotting to swap appointment of Obama's Senate successor for cash or a job.

Democratic sources told CBS News correspondent Ben Tracy to expect the release of the internal Obama transition report on contacts between Obama's team and Governor Blagojevich's office as early as Monday or Tuesday.

It's expected to detail contacts between the Governor's office and Obama staff members regarding the open Senate seat, which the Governor allegedly tried to auction off. A lot of questions have arisen about the future White House Chief of Staff, Rahm Emanuel, but the transition team told some news outlets this report will clear Emanuel from any wrongdoing, Tracy reports.

The official, who requested anonymity because the report is not yet public, said transition aides were eager to make public their findings about discussions with Blagojevich's office and move past the distraction that the governor's scandal had become.

The report is expected to disclose details about contacts with Emanuel, who Blagojevich aides have said spoke regularly to the Democratic governor. An official familiar with the internal review said the Obama team did not have access to transcripts of the FBI's taped conversations involving the governor and other people. The source spoke on condition of anonymity because this person was not authorized to discuss the review publicly.

Emanuel, a Chicago-area congressman, discussed candidates to fill the vacancy with Blagojevich's office, although it was not known if Emanuel spoke directly to Blagojevich or his chief of staff, a source close to the governor has said. The source requested anonymity because the person is not authorized to comment on Blagojevich's discussions about the appointment.

Obama has made few public remarks about the matter following Blagojevich's arrest Dec. 9 and the federal claims that the governor wanted something in return to fill the Senate seat.

Aides say Obama, who is vacationing in Hawaii with his family, has no plans to make a public statement on his internal report, which he has withheld in deference to prosecutors who are interviewing witnesses in the Illinois public corruption case.

U.S. Attorney Patrick Fitzgerald in Chicago said when announcing the charges that Obama was not implicated in the case, and sources have said Emanuel is not a target of prosecutors.

Emanuel has refused comment on his recent interaction with Blagojevich and his staff. Emanuel succeeded Blagojevich in his House seat in 2002, when Blagojevich became governor. Emanuel also served as an informal campaign adviser to the governor and shares a mutual friend with Blagojevich who has become a key player in the criminal investigation.

In addition to the charges related to shopping Obama's Senate seat, Blagojevich also is accused of exchanging campaign contributions for state contracts and appointments, and bullying Chicago Tribune owners to fire editorial writers before he would commit state help in selling Wrigley Field, owned by the Tribune parent company. John Harris, who also is charged in the case, has resigned as Blagojevich's chief of staff.

An FBI affidavit included in the federal complaint against Blagojevich and Harris does not specifically identify contacts Emanuel or other Obama transition staff made with the governor or his aides.

The affidavit characterizes and quotes conversations between Blagojevich and others about selecting a successor to Obama's Senate seat. The governor at times considered exchanging the seat for a presidential appointment, a job for his wife, campaign contributions and donations to a nonprofit he hoped to create, according to the complaint.

Obama's public statements so far have been limited to expressions of disappointment over the charges and assurances that no one on his team discussed deals with Blagojevich.

Blagojevich expressed frustration in one conversation taped by the FBI that Obama and his advisers weren't "willing to give me anything except appreciation. (Expletive) them," the affidavit states.

The governor also is quoted by investigators as telling Harris on Nov. 13 that he wants someone, who is referred to in the affidavit only as "President-elect advisor," to hear about Blagojevich's plan to create a nonprofit. Emanuel is believed to be that adviser.

Blagojevich wanted others to float his nonprofit idea and the prospect of Obama helping him raise millions for it so the adviser would know what he wanted before they discussed the Senate appointment and filling Emanuel's seat, the complaint states.