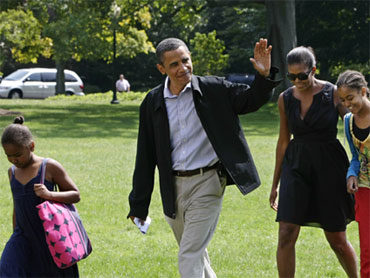 President Obama is addressing one of his key constituencies - organized labor - on Monday as union members gather to celebrate the holiday named for their movement.

As Obama Wednesday to Congress and the nation about his efforts to overhaul health care, a supportive audience at the AFL-CIO's annual Labor Day picnic in Cincinnati should provide welcome relief from the highly charged partisan atmosphere surrounding the issue.

Bloom is traveling to Cincinnati with the president, the White House said. He will be working with the National Economic Council to "provide leadership on policy development and strategic planning for the president's agenda to revitalize the manufacturing sector."

The White House said Bloom would continue in his position with Geithner but would expand his role to coordinate administration manufacturing policy with the Departments of Commerce, Treasury, Energy and Labor.

"Ron has the knowledge and experience necessary to lead the way in creating the good-paying manufacturing jobs of the future," Mr. Obama said in a statement released Sunday night.

Before moving to Treasury, Bloom was a special assistant to the president of the United Steelworkers union. He was a founding partner in the investment banking firm of Keilin and Bloom.

Despite a friendly audience at the labor picnic, where Mr. Obama is expected to be welcomed by national union leaders John Sweeney and Richard Trumka, the gathering could turn out to be a small oasis in the swing state of Ohio.

Opposition to Mr. Obama's health care overhaul was evident Saturday at a "Tea Party" rally in the Cincinnati suburb of West Chester, where a crowd of thousands protested with signs such as "Government-run health care makes me sick" and "Leave our health care alone."

The AFL-CIO's Eddie Vale said the picnic - this will be the 23rd annual such gathering - normally draws as many as 20,000 people. Then-presidential candidate Bill Clinton attended the event in 1992.