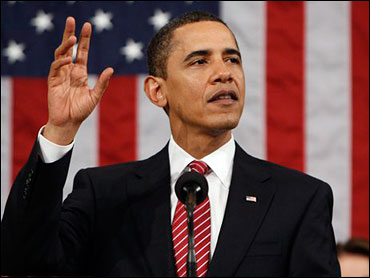 (AP)
Nothing gives a presidential speech an air of prestige and majesty more than an address to a joint session of Congress.

That's why President Obama asked to be invited to that venue for his health care speech this evening.

A CBS News tally shows that since taking office, Mr. Obama has given 28 speeches specifically about his health care proposals. And the issue was part of over 90 other addresses and remarks he delivered.

He mentioned it in his first and only other address to Congress on February 24th. He said excessive health care costs cause a bankruptcy every 30 seconds in America. He said 1.5 million could lose their homes this year because of health care costs. And he said 1 million Americans a year are losing their health care coverage.

"Given these facts," said Obama, "we can no longer afford to put health care reform on hold. We can't afford to do it. It's time."

It's a sentiment he'll convey again this evening.

In taking the top item on his domestic agenda to a joint session of Congress, Mr. Obama is following the lead of many of his predecessors.

Since Woodrow Wilson in 1913, there have been 46 presidential addresses to Congress other than State of the Union speeches. Wilson appeared before Congress 15 times to ask for a variety of legislative actions including tariff reform, Panama Canal tolls and even tax hikes.

"I come to ask very earnestly that additional revenue be provided for the Government," said President Wilson in the second sentence of his speech. "We need to resort to taxation, however we may regret the necessity of putting additional temporary burdens on our people."

Occasionally, U.S. presidents appeared before Congress at times of national loss and sadness.

"It is with a heavy heart that I stand before you," said President Harry Truman on April 16, 1945, to discuss the death of President Franklin Roosevelt four days earlier.

It was a task repeated by President Lyndon Johnson on November 27, 1963, five days after the assassination of John F. Kennedy.

"All I have I would have given gladly not to be standing here today," said the new president to the Congress and the world. "The greatest leader of our time has been struck down by the foulest deed of our time."

But nothing compared to the Joint Sessions in 1917 and in 1941, when U.S. presidents appeared to request Congress to exercise its most ominous power by issuing declarations of war.

"There are serious, very serious choices of policy to be made, and made immediately," said Woodrow Wilson, seeking authorization to go to war against Germany.

World War I fell short of billing as the war to end all wars, and FDR found himself before Congress 24 years later, uttering the best remembered words ever spoken by a president in the U.S. Capitol.

"Yesterday, December 7, 1941 – a date which will live in infamy – the United States of America was suddenly and deliberately attacked by naval and air forces of the Empire of Japan."

Nothing President Obama says tonight will be of that magnitude of importance, but he will try and convey a sense of urgency about his health care goals, as he did in his first address to Congress seven months ago.

"Nearly a century after Teddy Roosevelt first called for reform, the cost of our health care has weighed down our economy and our conscience long enough. So let there be no doubt: Health care reform cannot wait, it must not wait, and it will not wait another year."

It's the White House's belief that the setting of the speech will help President Obama make his case.