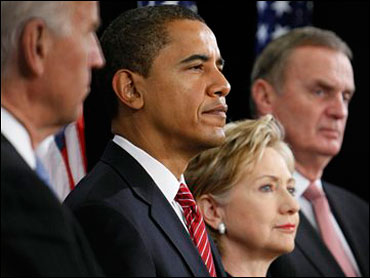 Mr. Obama said a newly completed agreement between Iraq and the Bush administration covering U.S. troop presence signals "a transition period in which our mission is changing" after a long war. The president-elect campaigned on a call to pull out most combat troops within 16 months of taking office, a period he said he still believes "is the right time frame."

Mr. Obama named Clinton, a New York senator, as secretary of state and said Gates would remain as defense secretary, a post he has held for the past two years.

The announcements rounded out the top tier of the team that will advise the incoming chief executive on foreign and national security issues in an era marked by wars in Iraq and Afghanistan and terrorism around the globe.

"I assembled this team because I am a strong believer in strong personalities and strong opinions," Mr. Obama said.

"I think that's how the best decisions are made. One of the dangers in a White House, based on my reading of history, is that you get wrapped up in group-think and everybody agrees with everything and there's no discussion and there are no dissenting views. So I am going to be welcoming a vigorous debate inside the White House."

"But understand, I will be setting policy as president. I will be responsible for the vision that this team carries out, and I will expect them to implement that vision once decisions are made."

"The time has come for a new beginning, a new dawn of American leadership to overcome the challenges of the 21st century," Mr. Obama added. "We will strengthen our capacity to defeat our enemies and support our friends. We will renew old alliances and forge new and enduring partnerships."

Mr. Obama said his appointees "share my pragmatism about the use of power, and my sense of purpose about America's role as a leader in the world."

"It's very very exciting to have such a strong, powerful national security team, and we're gonna need it. The world's a complicated place," Obama economic advisor James P. Rubin said on CBS News' The Early Show.

"I think with Hillary Clinton leading the charge, this will be a well-known team, a strong team, and I think we'll be able to restore respect for the United States around the world," Rubin said.

Andrew Card, a former chief of staff to President Bush, also praised the team in an interview with CBS News.

"I'm excited about the team he's put together," Card said. "I know the team is one that is mature. It'll be able to hit the ground running."

Mr. Obama introduced Clinton first, describing her as a friend and colleague, as well as a source of counsel and a tough opponent. He added that she's someone of tremendous stature who can advance America's interest around the world.

"She possesses an extraordinary intelligence and toughness, and a remarkable work ethic. ... She is an American of tremendous stature who will have my complete confidence, who knows many of the world's leaders, who will command respect in every capital, and who will clearly have the ability to advance our interests around the world," Mr. Obama said.

She said to Obama, in a brief turn at the lectern, "I am proud to join you ... and may God bless you and our great country." (Learn more about Clinton)

Clinton will give up her seat as a senator from New York to join the Obama Cabinet. Her appointment was preceded by lengthy negotiations involving her husband, the former president, whose international business connections posed potential conflicts of interests.

In order to make it possible for his wife to take the job, party officials say former President Bill Clinton agreed to disclose the names of contributors to his foundation and step away from day-to-day management of it. He'll also submit his speaking schedule to review by the State Department and the White House.

After the announcement, Mr. Clinton released a statement saying he "deeply proud."

"She is the right person for the job of helping to restore America's image abroad, end the war in Iraq, advance peace and increase our security, by building a future for our children with more partners and fewer adversaries, one of shared responsibilities and opportunities," the former president said.

Clinton's nomination is the latest chapter in what began as a bitter rivalry for the Democratic presidential nomination.

"This is something that's going to drive a lot of people on the left rather crazy," David Mark, a senior editor of Politico, told CBS News. "I think Barack Obama wants to show that's he's pulling in people with diverse viewpoints. He's not just looking for one point of view, and he's willing to consider all sides of an argument."

"The selection of New York Senator Hillary Clinton to be Secretary of State is a far more complicated and curious choice," writes CBSNews.com senior political editor Vaughn Ververs. "On the single greatest foreign policy issue of the past decade, Mr. Obama and Clinton took opposing sides and those differences created the biggest flashpoints in their battle for the Democratic nomination. In fact, Mr. Obama may never have gotten the chance to select a cabinet of any kind were not for his opposition to the war in Iraq from the very beginning." (Read more from Ververs' analysis)

During the news conference, Mr. Obama said disagreements sometimes are magnified during campaigns. As for his one-time rival, now Cabinet choice, he said, "I believe that there is no more effective advocate than Hillary Clinton for that well-rounded view of how we advance American interests."

Gates' presence in Chicago made him a visible symbol of the transition in power from the Bush administration to one headed by Mr. Obama.

Mr. Obama said Gates won the confidence of U.S. commanders and military personnel. The president-elect, reprising a campaign vow, also said he would give the military a new mission as soon as he takes office: "responsibly ending the war in Iraq through a successful transition to Iraqi control." He did not mention his oft-repeated pledge to withdraw most U.S. combat troops within 16 months.

Gates said he was "mindful that we are engaged in two wars and face other serious challenges at home and around the world."

"I must do my duty as they do theirs," he said of the men and women in uniform in Iraq, Afghanistan and elsewhere. "How could I do otherwise?"

He said he was "honored to serve President-elect Obama."

Gates' appointment fulfilled a campaign promise by Obama, the naming of a Republican to his Cabinet.

Holder vowed to revitalize a Justice Department staggered by scandal during the Bush administration, both over the dismissal of federal prosecutors and the administration's program of wiretapping as part of its war against terrorists.

Mr. Obama said Napolitano has spent her career protecting people. He said she understands the need to protect against terror attacks and to respond to natural disasters - and that she also understands as well as anyone the danger of unsecured borders. Napolitano, like Clinton, must resign her current job.

Mr. Obama said Jones, his national security adviser, "will bring to the job the dual experience of serving in uniform and as a diplomat. He has commanded a platoon in battle, served as supreme allied commander in a time of war and worked on behalf of peace in the Middle East."

In announcing Rice as his ambassador to the United Nations, Mr. Obama said he would make her a member of the Cabinet, an increase in stature from the Bush era.

"By appointing Susan Rice, a State Department veteran, to the U.N. and raising the position to Cabinet level, President-elect Obama has signaled a return to multilateralism and a focus on diplomacy," said CBS News Foreign Affairs Analyst Pamela Falk from the U.N.

"President-elect Obama's National Security team reflects an interest in experience and centrism; the appointments of Hillary Clinton and Susan Rice show a focus on the foreign policy crises that will confront the new Administration including the Middle East, Russia, terrorism and the Pakistan-India divide," said Falk.

Vice President-elect Joe Biden said each member of the team shares the goals and the principles of the new administration that "strength and wisdom must go hand in hand," and that America's security "is not a partisan issue."

Clinton, Holder, Napolitano and Rice all require confirmation by the Senate. Jones, as a White House official, does not. Nor does Gates, already confirmed to his post.

Mr. Obama's announcements marked a shift in emphasis, after a spate of appointments last week for his economic team.

He now has selected half the members of his Cabinet, and is doing so at an unusually quick pace during his transition as he seeks to fulfill his goal of being able to "hit the ground running" when he takes the oath of office on Jan. 20.

Mr. Obama also has reportedly settled on former Senate Democratic leader Tom Daschle to be his secretary of Health and Human Services and New Mexico Gov. Bill Richardson to be Commerce secretary, but those announcements are not yet official.