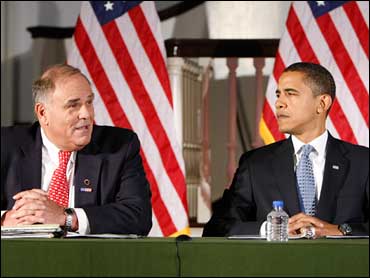 President-elect Barack Obama promised swift action Tuesday on an economic plan "to solve this crisis and to ease the burden on our states," and he cast governors as his partners in crafting a recession-rebound strategy.

"This administration does not intend to delay in getting you the help that we need," Obama said as he met with the chief executives of most states and sought to rally bipartisan support for an economic stimulus.

Over the next two years, 43 states are expected to face budget deficits, likely forcing some to slash spending to the bone, reports CBS News Chief White House Correspondent Chip Reid. Governors are now asking the federal government to spend 136 billion dollars to repair the nation's crumbling infrastructure -- everything from roads and bridges to mass transportation and schools.

President-elect Obama has set a goal of saving or creating 2.5 million jobs to boost the economy, which experts say has been in recession for the past year. His aides and congressional leaders have been discussing the outlines of a measure that could exceed $500 billion over two years. Congress wants to have it ready for his signature shortly after his Jan. 20 inauguration.

Incoming White House chief of staff Rahm Emanuel told reporters that in a private portion of the meeting, Obama and Republican and Democratic governors agreed that the measure must focus heavily on money for infrastructure as well as bureaucratic reforms to make it easier to complete programs without having to cut through piles of red tape.

But Emanuel was noncommittal on whether the legislation would contain exactly what the governors seek - some $136 billion more for infrastructure projects and at least $40 billion to temporarily increase the federal government's contribution to the Medicaid program for the poor and disabled.

"We're going to review all that," Emanuel said.

The measure is expected to blend money for those priorities with tax cuts, a temporary increase in food stamp payments, as well as investments in renewable energy projects and other "green jobs" initiatives.

Republican and Democratic governors, nearly all of whom are struggling with budget deficits at home because of the recession, sat at desks in the hall, with no separation by party. They included former and possibly future political rivals, such as GOP Govs. Bobby Jindal of Louisiana and Sarah Palin of Alaska, the party's vice presidential nominee this year.

Reid notes that while many Republicans are on board with Obama's plan, others have reservations, including Palin, who criticized Obama as a big spender during the presidential campaign.

"Solving those problems will not come from incurring more debt," Palin said.

In his brief public comments, Obama called the meeting the start of a partnership, and said he will go beyond asking governors to implement the economic plan that will include tax cuts for "hard-pressed middle class families" and increased federal spending.

"I'm going to be interested in you helping to draft and shape that economic plan," Obama said.

Biden told the governors he hopes they will not criticize the incoming administration for raising the deficit as it tries to help them. "I know none of you would do that," he said jokingly. Most states have constitutions that prohibit deficit spending.

The governors, in turn, pledged their cooperation.

Pennsylvania Gov. Ed Rendell, a Democrat who chairs the National Governors Association, said: "We are here with the understanding that we have to be not only participants but to lead in dealing with the financial problems that are upsetting our states."

Obama empathized with governors struggling to craft budgets while state tax revenues fall and an increasing number of people seek state help during the downturn. The president-elect said at least 41 states likely will face budget shortfalls this year or next.

As he has since his Nov. 4 election, Obama gave a sobering assessment of the challenges ahead and emphasized bipartisanship in finding solutions to the country's ills.

"I don't think anybody here is viewing the situation through rose-colored glasses," he said and warned of potentially disappointing decisions he will likely have to make. "Not all of those choices are going to be popular."

He promised Republican governors "the hand of friendship, the same commitment to partnership" that Democrats receive.

"We are not going to be hampered by ideology in trying to get this country back on track. We want to figure out what works," Obama added, drawing applause that started with Mississippi Gov. Haley Barbour, a former GOP national chairman.

Biden singled out Palin - his debate adversary from the fall campaign - and said her presence was a sign that both parties are confronting problems together. "Maybe walk outside with me later and say hello to me," he said to laughter from the crowd.

In the private meeting, according to Emanuel, there was a consensus that the Federal Emergency Management Agency was not responsive and needed to be fixed, and discussion about helping states deal with rising health care costs and increasing foreclosure rates.