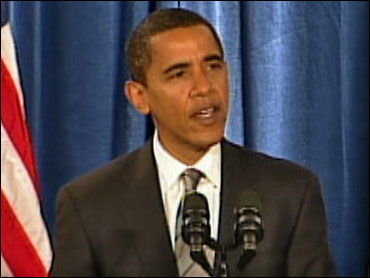 President-elect Barack Obama says he will try to "reboot America's image" among the world's Muslims and will follow tradition by using his entire name - Barack Hussein Obama - in his swearing-in ceremony.

The U.S. image globally has taken a deep hit during President Bush's two terms in office, primarily because of opposition to the U.S.-led invasion of Iraq, harsh interrogation of prisoners, the indefinite detention of terrorist suspects at Guantanamo Bay, Cuba, and mistreatment of inmates at the Abu Ghraib prison in Iraq.

Mr. Obama promised during his campaign that one of his top priorities would be to work to repair America's reputation worldwide, and that one element of that effort would be a speech delivered in a Muslim capital.

He pledged anew to give such a speech, though he declined to say whether it would happen during his first year in office.

"It's something I intend to follow through on," Mr. Obama said in an interview published Wednesday in the Chicago Tribune and the Los Angeles Times. "We've got a unique opportunity to reboot America's image around the world and also in the Muslim world in particular. So we need to take advantage of that."

Mr. Obama said his message would be twofold: that his administration will be unyielding in stamping out terrorist extremism but also "unrelenting in our desire to create a relationship of mutual respect and partnership with countries."

"I think the world is ready for that message," he said in the interview, conducted Tuesday.

During the campaign, Mr. Obama repeatedly faced questions about whether he is a Muslim, particularly in whisper campaigns that noted his middle name, that his father is Kenyan, and that he lived for a time as a child in Indonesia. Mr. Obama is a practicing Christian.

Asked if he would drop his middle name during his inauguration on Jan. 20, the president-elect said he would not.

"The tradition is that they use all three names and I will follow the tradition, not trying to make a statement on way or another," he said.

Mr. Obama also talked about the spiritual support he sought during his White House bid, particularly since he and his family left Chicago's Trinity United Church of Christ after inflammatory comments by its pastor, the Rev. Jeremiah Wright, became a campaign issue.

Mr. Obama said he set up a "sort of prayer circle across the country" of pastors who would pray for him every morning on a conference call. Mr. Obama said he sometimes joined the call, which involved leaders from various Christian denominations and other religious faiths.

"I'm not even sure that all of them voted for me," Mr. Obama said. "But they were willing to pray for me, and that's something that was wonderful."

Mr. Obama would not put a timetable on issues important to organized labor, what he called his promise to "put an end to the kinds of barriers and roadblocks that are in the way of workers legitimately coming together in order to form a union and bargain collectively." Among other things, he has promised support for a card-check system for unions trying to organize a new workplace and for adding labor and environmental protections to the North American Free Trade Agreement. "I don't want to anticipate right now what sequences will be on these issues," Obama said.

The man about to be the nation's first black president said he will make enforcing civil rights laws and making the criminal justice system color-blind top priorities for his administration. The Justice Department's Civil Rights Division "over the last eight years has had a lot of problems and really declining morale," he said.

Mr. Obama said he, his wife Michelle and their two young daughters will make frequent visits during his presidency back to their home in Chicago, perhaps as often as every six weeks. "My Kennebunkport is on the South Side of Chicago," he said. "Our friends are here. Our family is here. And so we are going to try to come back here as often as possible."