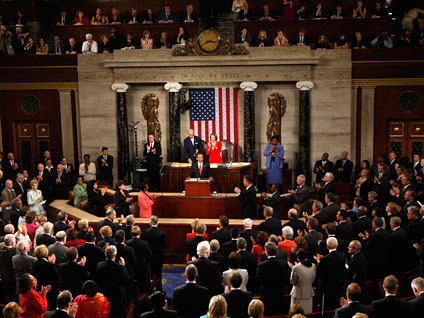 (AP)
It was a high-powered sales pitch from a president hell-bent on enacting a plan to provide all Americans with health insurance.

Using the biggest oratorical weapon in his arsenal, an address to a joint session of Congress, President Obama made it clear that failure, in his view, is not an option.

"I am not the first president to take up this cause, but I am determined to be the last." he said at the beginning of his 47-minute address.

At turns, forceful and gently understanding, Mr. Obama offered up some new rhetoric. But his basic arguments were largely the same we've heard in the 28 previous speeches he's given on health care reform.

In his latest address, he reached out to both Democratic supporters and Republican opponents of his goals.

But he was also quick to shoot down liberal demands for a "single-payer" health care plan while assuring conservatives that his approach would not add "a dime" to current or future deficits.

He labeled some attacks on the health care plan he wants as "bogus claims." He called it "a lie, plain and simple" that his plan would establish death panels with the power to "kill off senior citizens."

But when he insisted that his plan would not cover illegal immigrants in the U.S., South Carolina republican Joe Wilson shouted "You lie!" It was an unusual if not unprecedented breach of protocol during a presidential address.

Mr. Obama promised those he called "my Republican friends," that he would work to address "any legitimate concerns" they may have. But the head of the Republican National Committee wasn't buying.

He said the president is still trying to sell a "government-run health care experiment even though it will increase costs, increase taxes and increase the deficit."

And the president himself lapsed at times into campaign-style rhetoric and cadence, declaring "The time for bickering is over. The time for games has passed. Now is the season for action. "

He said he was willing to compromise – but there was a limit.

"I will not back down on the basic principle that if Americans can't find affordable coverage, we will provide you with a choice," he said.

And that brings the health care debate back to square one - still beset by issues that have defied resolution for decades even among members of Congress of the same party.

It makes it clear that little was settled or moved forward in the conflict over health care in America – and the arguments go on.