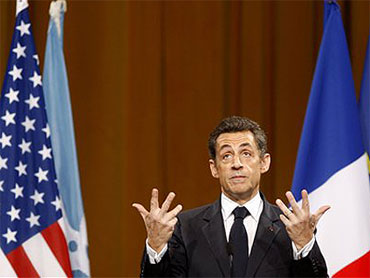 President Barack Obama will not request that French President Nicolas Sarkozy send more troops to Afghanistan, at least not when they meet Tuesday at the White House to review the war effort.

Instead of troops, Obama will seek more French military or police trainers, according to two Western diplomats. They spoke on condition of anonymity because the presidential discussions are private.

French trainers have been among those killed in Afghanistan this year, and polls show most French voters do not support the effort.

Last year Sarkozy resisted calls by Obama to add to the 3,750 French troops and trainers in Afghanistan. The U.S. is deploying 30,000 more troops to try to reverse gains made by the Taliban.

Whether or not they agree on troop levels in Afghanistan, Obama and Sarkozy are of a mind on wanting new sanctions against Iran for its nuclear activities, resuming Mideast peace talks, and better regulating the U.S. financial system.

Before the meeting with Obama, Sarkozy and French Finance Minister Christine Lagarde visited Congress for talks about climate change and other issues with Sen. John Kerry, a Democrat and chairman of the Senate Foreign Relations Committee. After the session with Kerry, Sarkozy said he would push for "very, very hard sanctions" against Iran.

The French leader also met with the leader of the House, Speaker Nancy Pelosi, a Demcrat.

In between affairs of state Sarkozy and his wife, Carla Bruni-Sarkozy, lunched at Ben's Chili Bowl, a no-frills urban diner that has become a Washington institution.

The Sarkozys were scheduled to join Obama and his wife, Michelle, for a private dinner in the White House. The French presidential palace called the diner a first-of-its-kind invite and a sign of esteem for America's oldest ally.